Batman: Return of the Caped Crusaders(2016)

Pooper:
Alfred administers an antidote to Batman, returning him to normal. The Bat-duplicates disintegrate due to having unstable atomic structures. Batman, Robin, and Catwoman defeat Joker, Penguin, and Riddler. Catwoman appears to fall to her death rather than going to jail (most likely, she makes an unlikely escape) after finally sharing a kiss with Batman.

Long Ending:
This movie is based on the 1960s Batman TV show and movie. Bruce Wayne/Batman (Adam West) and Dick Grayson/Robin (Burt Ward) are enjoying a peaceful night when they are summoned to action by the Bat signal. The dynamic duo go off to fight crime while Alfred (Steven Weber) helps conceal their secret identities from nosy Aunt Harriet (Lynne Marie Stewart). The heroes face off against their greatest villains – Joker (Jeff Bergman), Riddler (Wally Wingert), Penguin (William Salyers), and Catwoman (Julie Newmar). A fight ensues (that gives a nod to the Eartha Kitt and Lee Merriwether – other actresses who played Catwoman on the show),  but the villains escape with a duplication ray. The villains retreat to their lair at an abandoned TV dinner factory where they are again confronted by Batman and Robin. The dynamic duo are tied up in a ludicrous TV dinner-styled death trap and Catwoman injects Batman with a serum to turn him into a bad guy. The serum doesn’t appear to work and the dynamic duo escape (but not in time to apprehend the bad guys)

As it turns out, however, the serum is effective buttakes effect over time. Batman becomes ever more dark and gruff. He disappears when Commissioner Gordon (Jim Ward) and Chief O’Hara (Thomas Lennon) turn their backs (referencing Batman’s “disappearing” trick from modern comics and movies), snaps at Aunt Harriet, makes lurid comments about a sexy TV show host, and even fires Alfred. He continues to track the villains, however, and deduces that the criminals have flown to a space station where they intend to use the duplicate ray to create four separate Earths – one for each of them to rule. He and Robin take a Bat-rocket to the space station to confront the fiends.

They arrive just in time to save Catwoman’s life as the other three have turned on her for having feelings for Batman. Batman then confronts the three villains in a more brutal fight than usual (the “Zonk” and “Pow” effects being replaced with “Bludgeon” and “Fracture”). Catwoman escapes, but Joker, Penguin, and Riddler are hauled off to jail.

Catwoman’s serum continues taking effect and Batman becomes more dark and disturbing. He refuses to answer police calls for help – resulting in a massive crime wave sweeping the city. He kicks Dick out of the house (and thus, Robin off the team). It culminates in Batman using the duplicate ray to make evil duplicates of himself. Batman and the duplicates literally take over the city, firing and replacing the Mayor, Commissioner Gordon, and Chief O’Hara. Robin confronts Catwoman, who admits that she never expected the serum to make Batman this evil. The two pair up to face Batman. Catwoman manages to inject Batman with an antidote, but it has no effect. Batman reveals that he foresaw their efforts to stop them and injected himself with a Bat-anti-antidote. Catwoman and Robin flee as Batman appears unstoppable.

Now desiring fame, Batman takes over a variety TV show and has his duplicates install bombs in Gotham’s TVs that will detonate if anyone changes or turns off the channel. Gotham is now forced to watch Batman 24/7. Robin and Catwoman free all the villains from prison to help face off against Batman and his duplicates. Though they fight valiantly, the Bat-duplicates ultimately defeat them. Batman swigs some champagne in victory… and is restored to normal. It turns out that Alfred had concocted an antidote to the Bat-anti-antidote and slipped it into Batman’s champagne. Batman had foreseen the eventuality that he might someday turn evil and fire Alfred, and therefore left Alfred with the ingredients to this antidote in the event that happened. The Bat-duplicates get ready to attack the restored Batman, but disintegrate before they can attack. It turns out the duplicate ray created duplicates with unstable molecules (a reference to the Adam West Batman movie) causing them to disintegrate after being in existence for too long.

Upon seeing his duplicates disintegrate, Batman deduces that Riddler, Joker, and Penguin realized the duplicate ray was flawed and had devised all of the events as a distraction (even distorting Catwoman’s serum to make it overly effective). He, Robin, and Catwoman race off to find the villainous trio and find them escaping on a blimp with loot they robbed while Batman had been preoccupied taking over the City. The trio manage to catch up to the blimp and defeat Joker, Penguin, and Riddler. Catwoman shares a celebratory kiss with Batman. But despite his feelings for her, Batman acknowledges that Catwoman must go to jail for her prior crimes (but says he will wait for her). She says she cant’ handle being locked in a prison cell and jumps off the blimp to her apparent death (but more likely, improbable escape).

Bruce re-hires Alfred,  lets Dick move back into his home, and holds a surprise birthday for Aunt Harriet. Having reunited with his family and the City of Gotham, Batman and Robin continue their adventures as the dynamic duo. 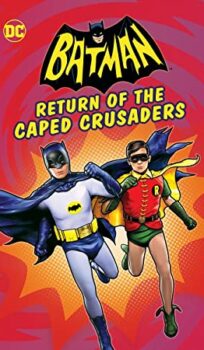