SHORT VERSION:
As the Earth Force conducts a fierce aerial battle with the Terrians for control of Terra, General Hemmer and a crew of technicians land in the Terraformer and start to rapidly convert the planet’s atmosphere into an oxygen-based one. Having come to sympathize with the Terrians through his friendship with Mala, Jim sees the Terrians being asphyxiated by the process and becomes disturbed. Then, when he sees Mala and his brother Stewart fighting, he becomes even more conflicted on where his loyalties lie. Soon, he decides that he can’t let the Terrians die, and after getting between Mala and Stewart and giving each of them a final goodbye look, he flies his ship straight at the Terraformer and destroys it by shooting his missiles at the command module, and Hemmer dies in the subsequent explosion. Unfortunately, thanks to damage that his ship sustained during his attack, Jim is unable to escape the blast radius and dies as well, but he dies peacefully with the knowledge that he did something heroic.

Mala is praised by her people as a hero, but she tells them that Jim was the real hero and then expresses pity for the humans because their resources on the Ark are almost depleted, so all they can do now is wait for their deaths. The Elder Doron tells her to not lose hope, for there are always alternatives. In the end, the Terrian Eldership negotiates a deal with the Ark’s reinstated Earth Council (a more diplomatic governing body that Hemmer and his soldiers launched a coup d’état against and dissolved prior to the battle) to create a huge oxygen-based sanctuary for the humans to live in, having decided to live in peace with them. A large statue of Jim is constructed in the center of the sanctuary to honor his memory and his heroic sacrifice.

LONG VERSION:
Once Mala, Jim, and the latter’s robot assistant Giddy fix Jim’s gunfighter ship and get back to the Ark, Jim leaves to get debriefed, but he tells Mala to stay put and promises that he will be back soon so they can search for her father Roven. However, after some time passes, Mala’s patience runs out, so she takes Jim’s blaster for defense and starts sneaking around the Ark to find her father. She eventually does locate him laying on a gurney alive in a furnace room with other dead Terrians lying around, but when she tries to wheel him out of there, two soldiers spot her and trigger an alarm. After telling Mala that he loves her, Roven throws her into an adjoining room before the security door seals shut, then takes the blaster she left behind and starts shooting at the soldiers. One blast shatters a window, however, and he and the soldiers get sucked into outer space and die. Mala is then captured by two other soldiers.

Jim files a report with the Earth Council saying that Mala was just trying to find her father, but General Hemmer – the commander of Earth Force who has been yearning to conquer Terra – tells the president that Roven’s actions prove that the Terrians are murderous and hostile and that they must take Terra by force. When the Council tries to convince him that they must take time to explore and to think before rushing headlong into war, Hemmer reaches his limit with them and stages a coup with his soldiers, then dissolves the Council and assumes command.

Jim and his brother Stewart get into an argument over the morality of Hemmer’s plan, since Stewart is eager to follow Hemmer’s lead but Jim thinks he is going at it all wrong. Hemmer then approaches them and requests for Jim to join his attack force. Jim respectfully refuses, but Hemmer then informs him that there is only two months worth of oxygen left on the Ark, and then shows him a hologram detailing how he intends to send a monstrous machine called the Terraformer onto the planet’s surface that, when activated, will convert the planet’s atmosphere into an oxygen-based one in seven days. When Jim asks about what will become of the Terrians, Hemmer ends the hologram and shows Mala imprisoned in an enviro-chamber right in front of them with air she can breathe, and then Hemmer has Stewart dropped into it and Jim restrained by other soldiers. As Stewart starts to suffocate, Hemmer tells Jim that he is doing this to test his loyalty, for all he has to do is press a red button nearby to make the room breathable for Stewart but not Mala. Jim ultimately presses it, but as Mala starts dying, he notices a respirator nearby and whispers to Giddy that he must rescue Mala. Giddy busts the glass on the chamber, causing a blowback that knocks Jim, Hemmer, and the other soldiers flat, and he gives Mala the respirator. As she follows him out, she sees Jim and realizes he was responsible, and he apologizes to her before passing out. Mala and Giddy are able to escape the Ark on another gunfighter, but a missile strikes it as they get near Terra, forcing them to eject once they are inside the atmosphere. Mala grabs onto Giddy’s tail so she won’t fall, but she loses her grip as they get near the ground, and she lands hard in a snow drift and falls into unconsciousness.

A Terrian transport finds her and brings her into the nearby secret military base that she and Jim had earlier went into to retrieve his ship, and she wakes to find her friend Senn watching her. He apologizes for having earlier told their leader Doron about Jim being in her home, but when she asks where Giddy is, he replies that he was found and is now being held captive by the Elders. Doron shows up and soon takes Mala to see Giddy, but on their way over, Mala notices many cloud sailer ships being readied for combat. Doron tells Mala that their race once came close to destroying themselves through war (which Mala had seen in murals on the base’s walls in her previous visit), so a small group of survivors formed the Eldership, and these Elders vowed to keep the past a secret and build a peaceful future. However, since invasion is now imminent, they have to prepare for battle, and he hopes that Mala can fill them in on what Earth Force has planned since she is the only one to have been inside the Ark and returned. She corrects him by saying that she isn’t the only one, and then she gets brought before Giddy, who is on the verge of being dissected by scientists. She stops them and tells them that Giddy saved her life, but Giddy informs her that Jim was her real savior, and he ordered him to protect her. Mala then uses this order to manipulate Giddy into helping her people defend themselves from Earth Force, saying that she will die if they transform her world. Meanwhile, as Jim and Stewart are being treated in the medical bay for cuts sustained from the glass, Stewart tries to justify Hemmer’s actions against him, but Jim incredulously asks how he could still defend Hemmer after that episode. Hemmer then enters the room, and Jim covers for his betrayal by saying that Mala must have reprogrammed Giddy during his time in her “captivity”. Hemmer informs him that he has assigned him to the terraforming campaign, and after Hemmer leaves, Stewart asks Jim if he will have his back in the coming battle. Jim replies that he will always look out for him, but he really ought to question if Hemmer will do the same.

The Terrians and humans later begin a fierce aerial battle, and Hemmer and a crew of technicians arrive in the Terraformer in the midst of it and activate the conversion process. When the Terrians start to concentrate their fire on the machine, Hemmer orders for the conversion to be accelerated to maximum, despite such an action leaving the machine extremely vulnerable to combustion. After Hemmer receives word that the process will become irreversible in 12 minutes, he calls in reinforcements to decimate the Terrian fighters in order to keep the process uninterrupted. The oxygen spreads out and starts to asphyxiate Terrian civilians in a nearby village, which Jim witnesses and becomes disturbed by. Mala then starts shooting at Stewart’s gunfighter, so he calls Jim for help, but after Jim sees that Mala is the attacker, he becomes even more conflicted on what he should be doing. Ultimately, he decides that he cannot let the Terrians be exterminated, and after getting in between Mala and Stewart, he gives each of them a final goodbye look before flying straight at the Terraformer with all weapons blasting. Though Hemmer is able to damage his ship with the machine’s anti-aircraft guns, Jim fires four missiles at the command module and blows it up, killing Hemmer and destroying the device.

Though Jim pulls up to try to escape the fires of the explosion, he soon accepts that he won’t be able to and calmly lets the flames destroy him and the ship, dying with the knowledge that he has done something heroic. Mala and Stewart manage to get out of the blast radius right at the last second, and Terra’s atmosphere returns to its original state. Mala is praised by her people for the fight she put up, but she points out that Jim was the real hero, and she expresses pity for the humans over how all they can do now is wait for the end since their resources are just about depleted. Doron tells her to not lose hope, for there are always alternatives.

In the next scene, Mala is shown flying with Senn on their cloud sailers, and they are joined by Stewart and Giddy in their ship as they fly towards a massive dome covering an oxygen-based sanctuary that has been made for the humans by the Terrians, the two races having decided to co-exist in peace thanks to negotiations between the Eldership and the reinstated Earth Council. As Stewart flies around inside and Mala looks on from the exterior, they each take a long look at a large statue of Jim being created in the center of the sanctuary to honor his memory and sacrifice. 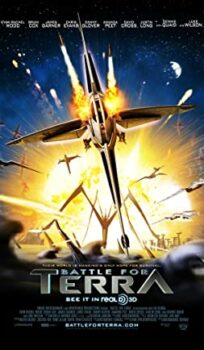