Staff Sergeant Nantz (Aaron Eckhart) is a Marine retiring from the Corps after losing a number of men in the Iraq and Afghan wars. Just after he has put in his resignation papers, an alien invasion strikes earth, and he is called to replace the Sgt. of a Marine platoon.

The platoon is sent into Santa Monica to rescue civilians before a bombing levels the city. The platoon takes a number of casualties along the way, though they are able to take a number of aliens with them. When the time comes for the bombing, the bombs don’t drop, and the surviving Marines and civilians discover that the aliens have pushed the military far back, thanks to a fleet of drones that have annihilated American air power.

An Air Force reconnaissance soldier (Michelle Rodriguez) tells Nantz about an alien control vessel, which they then spot as they’re fleeing the city. Nantz and the rest of his men stay behind and launch an attack on the control vessel, painting it with a laser for missile strikes. The fight is close, but a missile ultimately gets through, destroying the vessel and causing the drone fleet to collapse.

Nantz and the rest of his men are extracted, but when they get to base, they simply rearm and head out again, determined to participate in a counterattack to retake the city. 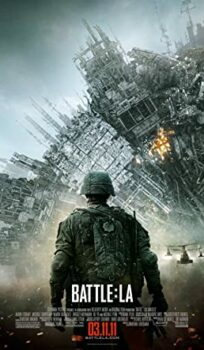