Beavis and Butt-Head Do the Universe(2022)

Dim-witted duo Beavis and Butt-Head get sent to space camp after destroying their school gym during a science fair. Astronaut Captain Serena Ryan thinks the two are qualified to help them dock their shuttle into a space station as they prepare for a mission to study a black hole, but the two are just fascinated by how sexual the docking simulator looks, and they also believe Serena is propositioning them for sex. Naturally, their antics cause destruction to the shuttle and space station, so Serena has them booted off the shuttle, where they are sucked into a black hole.

The boys end up being transported from 1998 to 2022. Alternate versions of themselves – Smart Beavis and Smart Butt-Head – try to get them to pass through a portal back to their time within two days, or reality will collapse upon itself. Serena is now governor of Texas and believes that the two have come back to expose her for trying to kill them, but they are just still looking to score with her.

After a series of misadventures trying to make their way back to their house in Highland, Beavis and Butt-Head have a fight and split up until they are captured by Serena and her agents. Her put-upon lieutenant, Jim Hartson, frees the boys and wants to expose Serena for her crimes. Everyone makes it back to the boys’ house, where Serena comes to realize that they are not out to get her, they just want to have sex with her. Smart Beavis and Smart Butt-Head open the portal for the boys to go back to 1998, but Hartson accidentally gets sucked into it, thus saving the world.

The boys go back to their normal lives, while Smart Beavis becomes the very first Beavis in the multiverse to score when he gets with Serena. 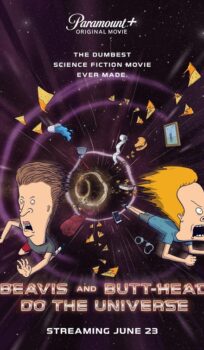