A group of neo-nazis led by Dominick (Kevin James) escape from custody. They make their way to a house in the woods where he is looking for a key for his own white supremacist agenda. Teenaged Becky Hooper (Lulu Wilson) evades them as they take her father Jeff (Joel McHale), his fiancé Kayla (Amanda Brugel), and her son Ty (Isaiah Rockcliffe) hostage. Dominick kills Jeff, prompting Becky to get revenge. She gouges out Dominick’s eye with the key before he sends his goons on her.

Becky kills the first guy, Cole, by jamming a sharp-edged ruler into his throat. Next guy Hammond is done in by a boat motor. The group’s muscle, Apex, shows remorse over his involvement in everything and tries to let Becky get away safely while leaving Dominick behind. Becky then goes after Dominick, while Apex returns to try and help. Becky runs over Dominick’s head with a lawnmower while she doesn’t forgive Apex and shoots him in the head.

Becky is questioned for the killings but doesn’t say much. Kayla and Ty are also safe. 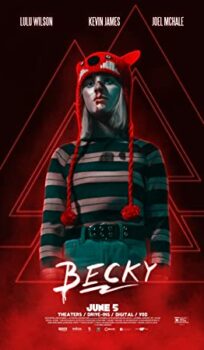