Jerry Seinfeld plays Barry Benson a bee just graduating from college. He and his friend Adam Flayman (Matthew Broderick) have to pick a job in the bee hive that they will have to do for the rest of their lives. Barry sneaks out of the hive with the bees that polinate flowers and sees the world. He isn’t supposed to talk to humans but after Vanessa (Rene Zellweger) saves his life he talks to her.

During his adventures outside of the hive he discovers humans consume honey (he finds Ray Liotta brand honey at a supermarket.) With the help of Vanessa he sues the major food companies that produce honey from bee hives and wins. The bees have so much honey that they stop working for the first time in history and stop polinating flowers resulting in flowers dying all over the world. After some convincing, and a trip to Pasadena’s Rose Parade to get the only fresh flowers that are still around, Barry gets the bees to work again. At the end, he opens a law firm inside Vanessa’s flower shop where he is consulting with a cow who is upset because humans use all of the cow’s cheese, milk, and other products. 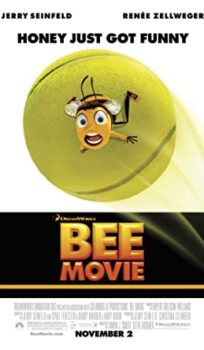