Jesse (Ethan Hawke) and Celine (Julie Delpy) are now a couple with 7-year old twin daughters, as well as Jesse’s 14 year old son from his previous marriage who lives in the US with his mother, while they live in Paris.

The movie shows them towards the end of a 6-week vacation in Greece, starting just as Jesse’s son is leaving, and heading back to his mother after being with them for part of the vacation.

After both serious and playful discussion of how they view gender roles and their own relationship, they have a major fight, which ends with Celine walking out and telling Jesse she no longer loves him. Jesse then finds her on the waterfront and attempts to restore peace.

After some resistance, Celine accepts his overtures and things seem to be mended. However, (as is usual in this series), the movie ends on an ambiguous note, as it is not clear whether it was the fight or the reconciliation that was only temporary, and which signals the true fate of their relationship. 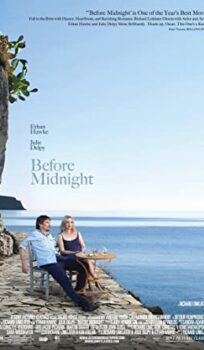