Shy teenager Suzu enters the virtual reality world of U and reinvents herself as mega pop star Belle, beloved by users all over the world. She soon meets a mysterious user called “The Dragon”, who is reclusive and antagonistic towards others, but Belle shows him kindness and tries to get through to his heart. All the while, he is pursued by U vigilantes led by Justin.

In the real world, Suzu is still mourning the loss of her mother, who died saving another little girl when she was younger. Her only friend is Hiro, and she has a crush on her childhood friend Shinobu, but Suzu later befriends popular girl Ruka and helps her with her own crush Kamishin. Eventually, the friends discover that Dragon is a teen boy named Kei, who gets abused with his brother Tomo by their father. Suzu sheds her Belle image to sing a song to Kei to reach out to him, with help from other U avatars. Her friends help her locate the boys’ apartment so she can go and defend them from their father. It works and the boys are thankful to Suzu.

Suzu returns home with a newfound sense of courage, and she is able to move on from her mother’s death and resume her friendship with Shinobu. 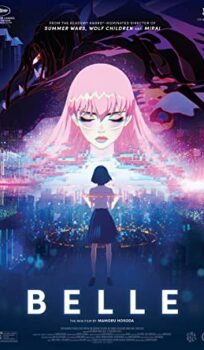