Beloved (Thandie Newton) IS, in fact, Sethe’s (Oprah Winfrey’s) dead child, the one she -as shown in a flashback- murdered many years ago, by slitting her throat with a saw, as she was preventing to have her children taken away and turned into plantation slaves.  Sethe figures this out when, once, while sitting in the fire along with her and Denver (Kimberly Elise), Beloved starts humming a tune Sethe recognizes as one only her children would know; then, Beloved bends her head back, revealing a neck scar, which reveals she is the reincarnation of the dead girl.  With this, Beloved gets Sethe completely under her influence.

Things start deteriorating progressively in Sethe’s house: Sethe neglects her job, for which she gets fired; the little money she has, she deplets it in sweets and nicknacks for Beloved -which she demands under heavy temper tantrums- while fully neglecting Denver (and the house, which becomes wasted) in the process.  Moreover, Beloved takes into walking about the place, nude and visibly pregnant with Paul D.’s (Danny Glover’s) baby.

All this forces Denver to find the courage to break her cocoon and abandon the house to look for a job and help for her mother.  Neighbors find out about the situation and come to the house to heavily pray and chant, to undo the apparent spell on Sethe.  At the climax of this situation, Sethe spots among the crowd a man who looks like the slaver who tried to claim her children before and runs to him with a knife, but Denver and the neighbors manage to calm her down, while Beloved screams frantically to call her attention.  Sethe has a physical and mental breakdown, but then Beloved vanishes into thin air, thus liberating her forever.

Time passes.  Denver runs into Paul D. again in the street, looking very alive, mature and confident -and visibly the sole supporter of her now ailing and sick mother-; they strike a friendly conversation, and she invites him to pay them a visit, but asks him to be careful with what he tells Sethe.  Paul D. obliges and visits Sethe, who laments having lost Beloved again; he promises to take care of them both.  She claims that Beloved “was her best thing”, but he objects and says with sincerity: “No, Sethe.  You are the best thing!”

Before the movie ends, there is another flashback of a memorable preaching of Baby Suggs (Beah Richards), and the camera panning away from Sethe’s house grounds. 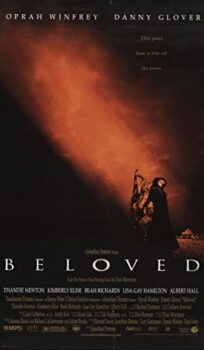