Beyond the Poseidon Adventure(1979)

Immediately after the events of the first movie, Mike Turner (Michael Caine) leads a salvage team into the Poseidon to find enough money to save his beloved boat from foreclosure. Along the way he must rescue the survivors he finds and battle Stefan Svevo (Telly Savalas), who is trying to get ahold of some plutonium that had been in the Poseidon’s cargo hold.

Turner ultimately escapes with Celeste (Sally Field), Harold (Jack Warden), Nurse Gina (Shirley Jones), Theresa (Angela Cartwright), and Larry (Mark Harmon) by swimming to the surface with SCUBA gear. They have a gunfight with Svevo (who has gotten the plutonium out through the hole the original survivors escaped through) and escape just as the Poseidon explodes, killing Svevo and his remaining henchmen.

Larry asks Theresa to come to his farm in Iowa, now that her father (Peter Boyle) is dead and she has nothing to go home to. Turner asks Celeste to be his new first mate, and the two kiss after she reveals that she was able to sneak a diamond off the Poseidon–the value of which will allow him to pay for his boat.

The rest of the cast dies, in the following order: 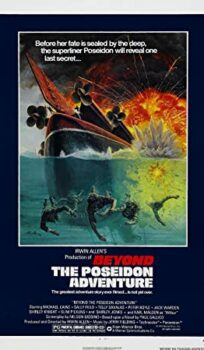