After some complications arise in the original deal between Billy (Adam Sandler) and Eric (Bradley Whitford) for ownership of Billy’s father’s hotel empire, Billy suggests to Eric that they engage in an academic decathlon to determine once and for all who will be the heir. They both enter the final round with Billy ahead by one point, participating in a trivia game where each one had to select a question for the other to answer. Eric has Billy try to answer a question on reflections of society in literature, and Billy delivers a long, incoherent, stupid response. He gets no points, but remains ahead. Billy then has Eric try to answer a question on business ethics, but since Eric has none, he stumbles over his words and soon breaks down and takes out a handgun. He gets ready to shoot Billy, but Principal Anderson (Josh Mostel), in his Revolting Blob wrestling outfit, charges Eric and takes him down.

Eric is not fazed by the attack, and sets up to execute Billy’s love interest Veronica (Bridgette Wilson). Danny McGrath (Steve Buscemi), whom Billy apologized to on the phone earlier for tormenting him in high school, comes with a rifle and stops Eric by shooting him in the butt. Danny gives Billy a thumbs up before leaving

Billy is shown at his graduation, diploma in hand and the acknowledgement of his status as the chairman of Madison Hotels. However, he chooses to step down from his position and give it to his and his father’s friend Carl (Larry Hankin), and Billy announces he was going to go to college to study to become a teacher. He and Veronica then kiss. 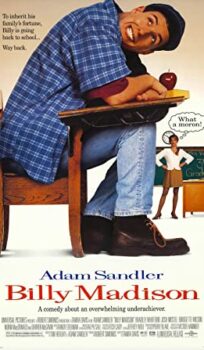