After a month, Bud (Pauly Shore) and Doyle (Stephen Baldwin) manage to find an escape door, and eventually bring in an army of people from outside for a huge “environmental” party. The resulting destruction and litter cause their girlfriends Monique (Joey Lauren Adams) and Jen (Teresa Hill) to leave them, Bio-Dome team leader Faulkner (William Atherton) to disappear, and the rest of the team ordered to go home by the chief investor. These things spark Bud and Doyle to change their ways, so they lock the team in and tell them that they will all restore homeostasis in the dome.

Over the next year, the team restores homeostasis to 98%, and Bud and Doyle also reconcile with Monique and Jen. All the while, Faulkner – who is still in the dome and in hiding – ends up going insane due to Bud and Doyle’s earlier antics, and considering the Bio-Dome a failure, he plans to destroy it with explosives. He puts them in coconuts and sets them to blow at the exact moment the dome’s doors open up again on Earth Day.

One night, Bud and Doyle find Faulkner, and they think they got him back on board with the project after chatting with him, but they unwittingly start helping him rig the coconuts. When they are left alone, Bud and Doyle play football with one of them, and Doyle fails to catch it, and it hits the ground and explodes. Realizing the danger they’re in, they and the others try to get out early, but fail. Bud and Doyle then decide to stop Faulkner, and after a lengthy chase, they knock him out and deactivate the coconuts. The Bio-Dome opens up at 100% homeostasis, and though Faulkner attempts to blow the whole team up with one last coconut, they foil him and get out unharmed. Bud and Doyle happily reunite with their girlfriends, and they bid the team a fond farewell.

As Bud, Doyle, Monique and Jen are driving for home, Doyle again needs to urinate, so they pull into a nuclear power plant just as the warning sirens go off. Faulkner is last shown running off into the desert, escaping the cops. 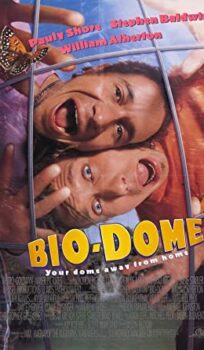