Pooper:
Malorie successfully makes it down the river to the sanctuary (revealed to be a school for the blind). She names the children and accepts that she is their mother.

Long Ending:
Malorie (Sandra Bullock) and her sister Jessica (Sarah Paulson) are driving to get an ultrasound of Malorie’s baby. News reports show citizens in other parts of the globe are engaging in mass suicide. Malorie is unsure she wants her baby, taking a pamphlet on adoption. As Malorie and Jessica leave the hospital, Malorie witnesses a woman violently committing suicide and infers that whatever is happening around the globe is now happening here. The sisters flee in their car as more people begin going crazy and kill themselves. When Malorie is distracted, Jessica sees something and crashes the car before committing suicide. A bystander from a nearby house goes to rescue Malorie and also sees something and commits suicide. Malorie and a few other bystanders flee into the house. the bystander came from.

As the initial carnage subsides, we are left with Malorie, homeowner Douglas (John Malkovich), Tom (Trevante Rhodes), Cheryl (Jacki Weaver), Lucy (Rosa Salazar), Charlie (Lil Rel Howery), Felix (Machine Gun Kelly), Greg (BD Wong), and fellow pregnant woman Olympia (Danielle Macdonald). The dynamic is strained as the food source dwindles, and Douglas blames Malorie for his wife’s death (his wife was the bystander that ran out to rescue Malorie). It soon becomes apparent that the world has been overrun by creatures that drive people insane/make them suicidal whenever they are seen. They also learn that when people who already suffer from mental impairment see the creatures, they become entranced and try to force others into looking at the creatures. Greg attempts to look at the creatures through home security cameras (theorizing he won’t be driven mad if the creatures are seen indirectly), but still goes crazy and kills himself when he sees them on the monitor.

Eventually, half the residents venture out to a nearby superstore for supplies (they drive there with the windows spray-painted shut and using the car’s GPS and parking sensors as a guide). After arriving successfully, they begin collecting supplies. Malorie finds caged birds in the store and realizes that they tweet uncontrollably whenever the creatures are around, acting like a warning signal. Douglas proposes that they live in the store (and abandon those remaining at the house) but the idea is vetoed by the others. They are then attacked by a man enraptured by the creatures, and Charlie is killed while stopping the attacker. The group return to the house with the supplies, but later that night, Felix and Lucy (who had been hooking up) steal the car and drive away (abandoning the rest of the group).

Several months go by and Malorie has grown very close with Tom. She also promises Olympia that if anything happens, she will protect Olympia’s child. A man named Gary (Tom Hollander) appears at the door begging for refuge. Douglas violently tries to kick him out, but the others take mercy on Gary and lock Douglas in the garage.

When the women go into labor at the same time, everyone in the house but Gary goes to help. It is revealed to the viewer that Gary has seen and is entranced by the creatures, and he begins ripping away the paper covering the windows and knocks out Tom. After the women give birth, Gary attacks the group and forces Olympia and Cheryl to look at the creatures (they then both kill themselves). He attempts to get Malorie and the babies, but is attacked by Douglas who broke back into the house after seeing Gary go crazy. Douglas is killed in the struggle, but Tom was able to recover in time to kill Gary. Tom and Malorie consummate their love and begin raising the children.

Five years pass. Tom is very loving to the children, but Malorie is distanced and calls them simply “Girl” and “Boy” (and has the kids refer to them as “Tom” and “Malorie”). They receive a message over a walkie talkie from a man named Rick who says there is a thriving, secure, and secluded community that the four are invited to. The only way there is via river, and the group will need to survive deadly rapids to make it there. As Tom and Malorie plan to make the journey, they are attacked by people enraptured by the creatures. Tom manages to kill the attackers, but ends up seeing a creature and commits suicide. Malorie and the children begin their journey down the river blindfolded.

Along the way, they face many dangers and are constantly stalked by creatures (Malorie brought the birds to act as a warning system). Malorie considers having one of the children undo their blindfold to guide them through the rapids (thus likely forcing them to see the creature), but eventually decides to have them go through the rapids blind. Although the boat capsizes, the three make it to shore and wander blindfolded through the woods to try and find the refuge. They trio get separated and the creatures appear and attempt to entice the children into removing their blindfolds. Only by admitting that she loves the children does Malorie convince the kids not to remove the blindfolds.

They arrive at the sanctuary and find it is a school for the blind. The school has an ivy covered courtyard that provides shelter from the creatures and is populated by birds who warn and non-blind members to cover their eyes if the creatures are near. Malorie introduces herself for the first time as the children’s mother, and says that the kids’ names are “Olympia” and “Tom,” signifying that they are a true family. 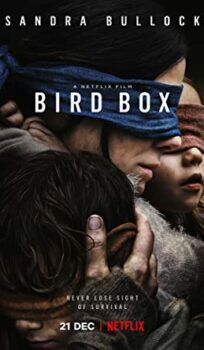