Black Beauty goes through different owners – both good and bad – over the course of his life, and around the time he reaches old age, he finds himself owned by a coal yard worker who regularly forces him to pull heavy cartloads of coal around town. However, one day, while he is being forced to haul another big cartload through the town square, he catches the attention of a kind elderly woman and her coachman, Joe (Mark Lester). They first chastise the coal worker for mistreating the horse, then buy the horse from him and take it back to the woman’s country estate, which she uses as a home for retired horses so they can enjoy their final years in peace.

Black Beauty recovers there, and when he is well enough, the elderly woman tells Joe to take him out to the estate’s meadow to wander around freely. We find out during this that Joe is the very same Joe who originally owned Black Beauty when he was a boy, plus his father also works on the estate and the elderly woman is Anna Sewell (Margaret Lacey), the author of the novel on which the film is based. Though Joe doesn’t fully realize that this horse is the very horse he used to own, he feels a strange connection to him, and he even names him Black Beauty. He, his father, and Anna watch Black Beauty as he grazes, and the horse looks up at Joe and remembers the days when Joe used to ride on him. 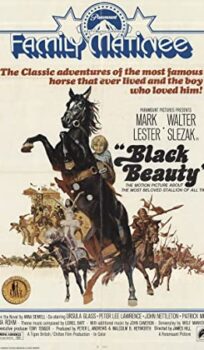