POOPER:
Britt successfully negotiates the release of the captive women and children.  Delores chooses to stay with Running Dog because her husband Ralph is abusive to her.

LONG VERSION:
Alan Johnson (Christopher Reeve) and Britt Johnson (Tony Todd) are blood brothers living in Texas in the early 1860s, along with their families.  They fled the Carolinas two years earlier after Alan, a former plantation owner, freed his childhood friend Britt from slavery.  With the Civil War beginning, the US Army soldiers protecting the Johnsons and the rest of the settlers are forced to evacuate the now-Confederate Texas.  Alan and Britt know that the departure of the soldiers will mean the local Indian tribes, the Comanche and Kiowa, will resume their attacks on Elm Creek, the name of their settlement.  A small group of Texas Militiamen from Austin arrive at Elm Creek, and their commander suggests everyone leave their homes and move into nearby Fort Belknap, but most refuse to give up their hard-earned land.  While the militia and the settlers are preparing to defend Elm Creek, the tribes attack, under the combined leadership of Little Buffalo.  Some of the militiamen and settlers are killed, and all the women and children are taken away as hostages.  Once at the Indian camps, the hostages are split between the Kiowa and the Comanche.  While the Kiowa are peaceful to their women, the Comanche rape theirs, including Alan’s wife Sarah (Nancy Sorel).

Believing the only way to get their families back is to negotiate, Britt decides to go to the Indian territory and try to trade horses and livestock for them.  Britt knows that Indians look at blacks differently than whites, and he feels that he is the only person who could safely make the trip there and back.  Britt then travels alone through hostile territory until he reaches the Kiowa camp.  His courage in traveling alone and honesty in his negotiations with the Kiowa leads their chief Lone Wolf to give him the name Black Fox.  With the help of Running Dog (Raoul Trujillo), a Kiowa who speaks English, an agreement is reached to trade three horses for each woman and one for each child.  Britt/Black Fox and Running Dog then travel to the Comanche camp and prepare to make a similar offer.  However, the Comanche chief tells Britt that he will have to negotiate with each individual Comanche for the women and children.  Everyone agrees to the trade except Standing Bear, the one who has Britt’s wife Mary (Janet Bailey) and son Frank.  He refuses to negotiate, so Britt challenges him to a fight for them.

Britt and Standing Bear’s fight will be a tug-of-war over a pit full of snakes, and the one who doesn’t fall in wins.  The two go at it, and Britt ultimately wins by jumping over the pit, tying the rope around Standing Bear’s neck, jumping back over the pit, and pulling him into it.  With Britt now having negotiated for all of the women and children, they head back to Elm Creek, but the deal won’t be completed until the settlers come up with 70 horses.  The Indians have given the settlers until sundown to produce the horses, or the deal is off and they will attack.  Just as the sun is about to set, the settlers arrive with the 70 horses, and the trade is completed.  However, one of the women chooses not to return to Elm Creek.  Delores Holtz (Cynthia Preston) has fallen in love with Running Dog and now goes by the name Morning Star.  She would rather stay than return to Elm Creek because her husband Ralph (Chris Wiggins) is abusive to her.  Ralph wants to attack the Indians to get her back, but Britt, Alan, and the rest of the settlers and militia refuse to follow him.  The movie ends with the settlers and their reunited families returning to their homes. 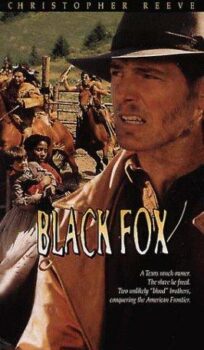