POOPER
FBI Agent John Morris, the partner of John Connolly, confesses what he knows about Connolly’s arrangement with Whitey Bulger in exchange for immunity.  The entire Winter Hill Gang, minus Whitey, is arrested and one by one they flip on their friend/boss in exchange for lighter sentences.  Connolly is also arrested for his involvement in the Roger Wheeler murder and revealing classified information and is sentenced to 40 years in prison.  Whitey flees Boston before he can be arrested, and is finally captured in 2011.  He is sentenced to two life sentences plus five years.

LONG VERSION
James “Whitey” Bulger (Johnny Depp) is a low-level mobster with the Winter Hill Gang in South Boston in 1975.  Whitey’s Irish gang is at war with the Italian Angiulo Gang, based out of North Boston.  Both the Winter Hill and Angiulo gangs have the attention of the Boston office of the FBI, but they are not able to make a case against either of them.  The newest agent assigned to Boston is John Connolly (Joel Edgerton), a childhood friend of Whitey.  Connolly approaches Whitey and asks him to be an informant for the FBI, but Whitey refuses, claiming he isn’t a rat.  Connolly says that he wouldn’t be informing on his gang, but on the rival Angiulos.  Whitey is still unwilling to do it, but after an Angiulo member kills a Winter Hill member, Whitey changes his mind and agrees to give Connolly info about the Angiulos.  Whitey then tells the rest of the gang what he’s doing, and they are surprised by this, but that changes after Whitey tells them that with his info, the FBI will be concentrating on catching the Angiulos and not them.  Connolly then tells his boss Charles McGuire (Kevin Bacon) what he is doing.  McGuire is doubtful this arrangement will work, but he does get the support of his partner John Morris (David Harbour).

Six years later, Whitey is now the head of the Winter Hill Gang, and still informing on the Angiulos, but his info is not enough to make a case against them.  With McGuire threatening of pulling the plug on the operation, Whitey suddenly produces pictures of the Angiulos at their hideout, which allows the FBI to start wiretapping their conversations.  These wiretaps finally allow the FBI to make a case against them and arrest the entire gang, making Connolly a hero in the office.  This also strengthens the relationship between Connolly and Whitey, much to the chagrin of Connolly’s wife Marianne and Morris.  As expected, the Winter Hill Gang is being ignored while the FBI and the DA are taking their case against the Angiulos to court, so Whitey and the gang proceed to take over all of Boston, and soon reach out across the country.  One day, one of the drug dealers that works for Whitey approach Connolly and Morris and tells them of Whitey’s involvement in the murder of Roger Wheeler, the new owner of World Jai Alai, who threatened to cut Whitey out of an embezzlement deal.  They don’t believe him, and Connolly later asks Whitey about the murder.  He denies being involved, but he now knows who talked to the feds.  Whitey has the dealer killed, making Connolly an accessory to murder.

Several more years go by, and there is a new DA in Boston named Fred Wyshak (Corey Stoll).  He meets with Connolly and asks why there isn’t any investigation of the Winter Hill Gang, but Connolly gives him a non-answer.  Also at this time, Whitey’s beloved mother dies.  He distracts himself from this by beginning to export weapons to Northern Ireland and the IRA.  After sending off a large shipment of guns by boat to the IRA, Whitey has dinner with Connolly, Marianne, and Morris.  Marianne refuses to associate with him and fakes an illness to get out of the dinner.  Morris tells Whitey the “family secret” to a steak marinade, and Whitey says to him that if he gave up that secret so easily, what secrets about him will he also give up?  Whitey plays it off as a joke, but Morris is now terrified of him.  Meanwhile, Connolly tells Whitey what information the FBI has about other Boston-area gangs, some of which is classified, something he’s been doing since they began this arrangement back in 1975.  Later, Whitey finds out that the guns were seized by the ATF, and Whitey has the boat pilot (an informant for them) killed.

Wyshak goes to McGuire and demands an investigation of Whitey, and that’s when he learns of Connolly’s arrangement.  The FBI cannot go after Whitey, since some of his info is being used in the ongoing Angiulo trial, and arresting him would jeopardize that case.  But he can investigate Connolly and Morris and the rest of the Winter Hill Gang for their activities.  Morris, realizing that an investigation of their dealings could lead to his murder, confesses what he knows about Connolly and Whitey in exchange for immunity.  He also talks to reporters for the Boston Globe and the story that the FBI is working with the Winter Hill Gang makes headline news.  The entire Winter Hill Gang, minus Whitey, are arrested and one by one they flip on their friend/boss in exchange for lighter sentences.  Connolly is also arrested for his involvement with the Roger Wheeler murder and revealing classified information and he is sentenced to 40 years in prison.  Now with enough evidence to charge Whitey, the FBI go to arrest him, but by this time Whitey has fled Boston.  He becomes one of the FBI’s ten most wanted, and as the movie ends, he is finally captured in 2011.  He was sentenced to two life sentences for the murders, plus another five years for his other crimes. 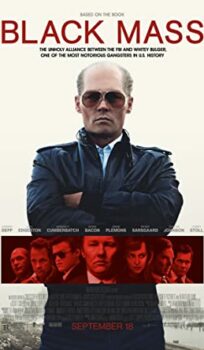