POOPER:
Quint flies the car out of Nyland’s office to escape, killing Nyland in the process.  Quint then fights Ringer for the disk, and Quint knocks him out.  He then gives the disk to Agent Johnson and gets his money.  Quint and Nina end up together.

LONG VERSION:
Sam Quint (Tommy Lee Jones) is a former thief hired by the FBI to steal a computer disk which contains incriminating evidence against The Lucky Dollar Corporation of Las Vegas.  After stealing the disk, Quint is pursued by Marvin Ringer (Lee Ving), another former thief and acquaintance who works for the company.  At the same time, a prototype vehicle called the Black Moon, which can reach speeds of 325 MPH and runs on tap water, is being tested in the desert by Earl Windom (Richard Jaeckel).  Quint and Windom later cross paths at a gas station, where Quint hides the disk in the back bumper of the Black Moon.  Windom is hauling the Black Moon to Los Angeles, and Quint, still being pursued by Ringer and his men, follows Windom and his team there.

Now in LA, Quint meets with FBI agent Johnson (Bubba Smith), and he demands double pay and a clean passport because he is now dealing with Ringer.  Afterward, Quint tracks down Windom and the Black Moon at a posh restaurant, where Windom is negotiating a deal to sell the prototype to a car manufacturer.  Before Quint can get to the disk, a group of auto thieves, led by Nina (Linda Hamilton), steals all of the cars in the parking lot, including the Black Moon off of it’s trailer.  Quint gives chase, and tracks the cars to an office tower, but loses them in the parking garage.  Inside the garage, Quint is seen on the security cameras, but nobody recognizes him.  Back at the restaurant, Quint meets Johnson again.  Johnson says he needs the disk in three days or the government’s case against The Lucky Dollar will be thrown out of court.  He also tells Quint that if he fails to deliver the disk, he won’t get paid.  Quint then goes to Windom and his team and asks for their help in getting the car back, but they refuse, insisting that they go to the police first.

After getting the blueprints for the towers from city hall, Quint begins staking them out.  The Nyland Towers are a pair of office buildings built by Ed Nyland (Robert Vaughn), who is also the head of the stolen car syndicate.  The basement of the towers is a large chop shop, and Nyland keeps the best cars for himself and sells the rest.  He scolds Nina for stealing a car he can’t possibly resell nor does he want it, but he also won’t allow Nina to keep it for herself.  After seeing Nina leave the towers, Quint follows her to a nightclub.  At the club, they meet and go to her apartment.  They have sex, then he tells her that he wants the funny looking car back and he wants her to help.  She doesn’t say no, but doesn’t say yes either.  Later, Windom and his team go to the towers to look for evidence to give to the police.  Nyland’s goons kill one of the team members, so they go back to Quint and offer their assistance.  Meanwhile, Ringer has tracked down Quint, and he and his men attack him, demanding the return of the disk.  Quint is able to kill two of the henchmen, but Ringer gets away.

The next day, Nina is summoned by Nyland.  He shows her the tape of Quint outside of the garage, and she says she doesn’t know him.  He then shows her a tape of them having sex.  He calls her a traitor and has her locked in a closet, to be dealt with later.  Meanwhile, Quint and Windom determine that since the chop shop entrance is impenetrable from the garage, the best way to get in is through the unfinished, unsecured second tower.  While Windom knocks out the security cameras, Quint goes up the empty tower, crosses over to the other one, and heads down.  While descending down a ventilation shaft, he discovers Nina in the locked closet and gets her out.  She then agrees to help Quint steal the Black Moon.  After knocking out a guard and stealing his uniform, Quint and Nina enter the chop shop and take the Black Moon.  Nyland has since learned that Nina is no longer locked up and sees her in the garage.  Windom is on the other side of the garage door and blows a hole in it with C-4, but emergency bars drop down to cover the hole in the door before Quint and Nina can escape and are trapped.

Quint drives the Black Moon into the freight elevator, which takes them to Nyland’s office.  During the chase on that floor, Nina activates the turbo boost that makes the car go 325 MPH.  The car then shoots towards a window, hitting and killing Nyland instantly.  The car then goes through the window and flies into the unoccupied building.  Just as they think they are safe and Quint gets the disk out from the bumper, Ringer shows up and takes the disk.  He and Quint start fighting just as Agent Johnson shows up.  After a brutal fistfight, Quint knocks out Ringer and takes back the disk and gives it to Johnson.  Quint then takes his money from him and says he is officially retired from working with the FBI.  Windom then shows up and is grateful his car is still in one piece, but wonders how they will get it down.  The movie ends back at Nina’s apartment, where Quint asks her if she is happy she stole the Black Moon.  After she says yes, he says that he is too and they have sex again. 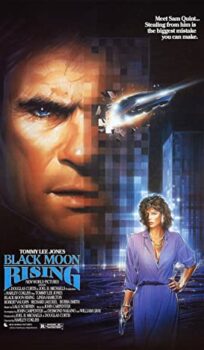