Orpheus is a street car conductor in Rio halfheartedly engaged to Mira.  Orpheus falls in love with Eurydice during Carnaval.  A man in a skeleton costume (Death) always seems to be following Eurydice.  Orpheus accidentally kills Eurydice when he turns the power on at his trolley station.  In homage to the Greek Legend there is a hostile dog at a gate (Cerberus), the spirit of Eurydice being lost during a Voodoo ritual because Orpheus looks back, a visit to the morgue (Hades), and a group of crazy women (Maenads).  Mira throws a stone at Orpheus while he is carrying the body of Eurydice, and he falls to his death.  A group of children believe the sun will not rise unless the guitar of Orpheus is played. The guitar is played, the sun rises and the children dance. 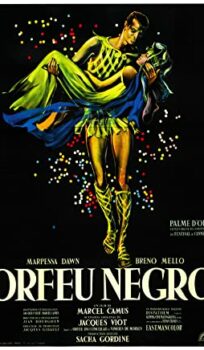