Submitted by Jeremy (Pooper) and Evan B (Longer)

Pooper:
James Donahue (James Allen McCune) thinks there’s a chance his sister Heather may still be out there following her disappearance 20 years ago. He and his three friends, plus two locals, go into the woods to investigate.

Lane (Wes Robinson) almost survives after following the witch’s orders but Lisa (Callie Hernandez) kills him with her pocketknife.

Lisa and James make it to the end but are both killed when, after facing the corner, they turn around to see the witch.

Long Ending:
Although the footage recovered at the end of the first film suggested that Heather had been killed by the Blair Witch and the house she was last seen in was never found by search parties, her brother James (James Allen McCune) has never given up hope that she may still be alive in the woods. A recent video posted online purports to show footage of Heather still alive and trapped in the house. James decides to backpack into the woods to look for the house where his sister may yet survive. He is accompanied by his childhood friend Peter (Brandon Scott), Peter’s girlfriend Ashley (Corbin Reid), and filmmaker Lisa (Callie Hernandez). Lisa is coming along to document their search.

The group meets with some local conspiracy theorists named Lane (Wes Robinson) and Talia (Valorie Curry), who discovered the new footage that purports to show Heather alive while they were hiking through the woods. Lane and Talia agree to guide the group through the woods. The pair expand upon the mythos of the Blair Witch, stating that the witch was essentially killed by being hung from a tree with rocks tied to her limbs, that she attacked and killed a young girl in a river in the woods, and that the witch “spoke” to Rustin Parr (the deceased owner of the house that Heather and her crew from the first film were last seen) and convinced him to kill his own family and other victims.

As they hike through the woods, Ashley receives a mysterious cut while crossing the river where the young girl had been killed and becomes very ill. During the night, the group ends up mysteriously sleeping for almost an entire day, hear wild noises in the woods, and awaken to find the “dolls” associated with the Blair Witch strung up. They eventually deduce that Lane is at least responsible for hanging the dolls (and may have fabricated the video he posted showing Heather) and force he and Talia to leave the group. But even after having expelled Lane and Lisa, the group are unable to find their way out of the woods and supernatural occurrences continue to escalate. Most notably, once night falls, the sun does not rise for the remainder of the film.

Eventually, the group crosses paths with Lane and Talia – both of whom claim they have been in the woods for weeks without being able to find a way out (and they look like they have indeed been stuck there for a long time). Lane, seemingly crazy, abandons Talia with the group to run off in the woods. While looking for firewood, Peter is attacked and abducted by an invisible force. The others go to sleep and when they awaken, find hundreds of dolls strewn around their campsite. Ashley confronts Talia for again hanging the dolls, though Talia denies any wrongdoing and even points out that a lock of her hair has been tied to one of the dolls. Ashley snaps the doll with Talia’s hair in half, causing Talia’s back to break (essentially, the doll was a voodoo doll). The group is then assaulted by an invisible force and they run into the woods where Ashley becomes separated from James and Lisa. Ashley pulls a root out of her cut (suggesting she is being turned into a living Blair Witch doll) and is later killed when she is thrown out of a tree she climbs into.

Lisa and James stumble upon the Rustin Parr house and James runs in after thinking he hears Heather’s screams from within. Lisa only enters when she sees an ominous alien-like figure walking through the woods. Inside, Peter is seen crying and facing the corner (when Rustin Parr killed his victims under the Blair Witch’s influence, he made the other victims stand in the corner so they couldn’t see what was happening. According to Lane, they stood in the corner because if you saw the Blair Witch, you would die immediately). Lane – having seemingly aged another month or two and claiming to hear the voice of the Blair Witch, attacks Lisa.  Lisa eventually kills him by stabbing him in the throat with a pocket knife. We also discover that the footage Lane had posted online was actually footage of Lisa running through the house (and apparently, the footage was transported back in time by the Blair Witch for Lane and Talia to find).

She finds James in the attic and they are menaced by the alien-like figure and see lights glowing in the woods. James deduces that if they stand in the corner and look away from the figure, it can’t harm them. This appears to be true in that, as long as they face the corner, the entity does not harm them. Suddenly, James claims to hear Heather’s voice and turns away from the corner and is immediately attacked by the figure. Lisa tries to escape by walking out of the house backwards (using the viewfinder on her video camera to guide her), thus “looking away” from anything that may be in the house. She almost makes it out, but then hears James talking to her. She turns around to look for James but is immediately attacked by an entity. She falls to the ground and the film ends. 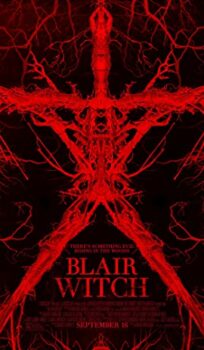