After finishing their gig at the Palace Hotel, Jake and Elwood receive $10,000 from a record producer who wants to sign them. After arranging to pay off their debt to Ray Charles and the band, Jake and Elwood take the remaining $5000 (the amount owed on the orphanage they are saving) and head to Chicago. The famous “It’s 106 miles to Chicago …” line is spoken here. Before leaving, they finally encounter Carrie Fisher’s character. She was Jake’s fiancee who was left at the alter, and she wanted revenge on him. Jake uses his charms to get Carrie to drop her gun, and he and Elwood get away.

Despite getting chased at various times by the Illinois State Police, the Chicago Police Department, the Chicago Fire Department, the U.S. Army, the musical group The Good Ole Boys, and the Illinois Nazis, Jake and Elwood make it to the Cook County Assessor’s Office. Moments after making the payment to the clerk at the assessor’s office (played by Steven Spielberg), Jake and Elwood are arrested with hundreds of guns pointed at them.

The movie ends back at Joliet prison, with the Blues Brothers and the band performing “Jailhouse Rock”. 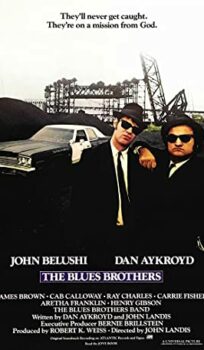