Under the influence of Paul (Allen Leech) and, after being grilled about his personal and sex life at a press conference for the promotion of the 1982 album Hot Space, Freddie (Rami Malek) finds his relationship with his band mates severely fractured; especially when he announces his intention of trying to go solo, under a deal with CBS Records. He moves to Munich with Paul and starts working on material for two solo albums -which prove to be a gruelling process, since he doesn’t seem to click as well with the people he must work with as with his own band, come recording time- while, also, finding himself heavily dragged into the local gay scene.

Mary (Lucy Boynton) comes for a visit and sees him surrounded by total indulgence -drugs, alcohol, a parade of shady men all around-; she begs him to return with the band, so they can perform together at the upcoming Live Aid Concert. He finds himself dumbfounded by this info -“Miami” (Tom Hollander) had called previously about it, but Paul took the call and deliberately said nothing about it- and, at the same time, is taken by surprise, first negatively, then supportively, when Mary announces she’s pregnant. When Freddie confronts Paul about concealing the Live Aid info, he finally realizes how toxic Paul had been in his life all along and fires him. In retaliation, Paul, aiming to damage Freddie’s public image, discloses his numerous gay affairs to the media.

After secretly getting tested for HIV and finding out he has AIDS, Freddie returns to London, makes amends with “Miami” and the band, discloses his illness to them and they get to be a last-minute addition to the Live Aid roster. He also reconnects with his parents and sister and looks for Jim Hutton (Aaron McCusker), the server he had shared a moment with, earlier in the film.

At the massive event of the Live Aid Concert, the expected collections are almost negligible, until Queen performs, causing a surge in phone calls to donate. The band gives a lively performance in front of an excited audience, while Jim, Mary, her boyfriend and Freddie’s parents all proudly watch – even a despondent and regretful Ray Foster (Mike Myers) gets to listen on the radio.

In the end, title cards announce that Freddie died of AIDS-related complications at the age of 45, in 1991, and, after his death, the remaining members of the band helped established the Mercury Phoenix Trust, to raise worldwide awareness about AIDS and help battle its spread. The credits roll, showing clips of archive footage from Queen’s different performances. 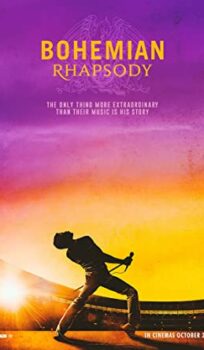