Pooper:
Arthur, his wife, and backup deputy Chicory are the only ones to escape alive. It is implied that a dying Sheriff Hunt managed to kill the remaining troglodytes.

Long Ending:
The film begins with two brigands named Buddy (Sid Haig) and Purvis (David Arquette) murdering a group of travelers out in the desert and robbing the corpses. The pair then hear ominous animal-like howls and run deep into the desert. They come across a burial ground adorned with animal and human skulls and the unearthly howling grows louder. Suddenly, a savage jumps out and brutally attacks Buddy. Purvis runs away, but not before accidentally destroying one of the burial shrines.

A few days later, the movie jumps to the old Western town of Bright Hope. Arthur O’Dwyer (Patrick Wilson) has suffered a debilitating leg injury. He is being treated by his wife and town doctor, Samantha (Lili Simmons). While walking past the O’Dwyer house, elderly backup deputy Chicory (Richard Jenkins) sees Purvis burying something on the property. He tells Sheriff Hunt (Kurt Russell) about Purvis’ seemingly criminal actions and the two approach him at the town saloon. Purvis tries to make a run for it, but Sheriff Hunt shoots him in the leg. Local wealthy townsman John Brooder (Matthew Fox) goes to the O’Dwyer house to escort Samantha to the jail so she can treat Purvis’ wound. Samantha decides to spend the night in the jail to watch over Purvis, and Deputy Nick agrees to spend the night at the jail as well. During the night, hellish howls are heard throughout the town.

In the morning, Sheriff Hunt is awakened to the news that a stable was raided and the stable boy killed and butchered. He then learns that the jail is empty and Purvis, Samantha and Nick are missing. An arrow is recovered from the jail and brought to one of the Native American townspeople. The Native tells the group that the arrow belongs to a group of inbred, cannibalistic humans called Troglodytes that live several days’ ride outside of town. He says that the Troglodytes are essentially inhuman and any rescue attempt would be foolish. Much to Sheriff Hunt’s wife’s chagrin, he says he will attempt a rescue anyways along with Arthur. Brooder and Chicory also demand to join the rescue.

Along the way, Arthur’s leg deteriorates. The group also argues with each other on numerous occasions. Things get worse when their horses are kidnapped in the night by a group of Mexican bandits. The heroes continue on foot, causing Arthur’s leg to get worse. The other three decide they must amputate Arthur’s leg. They use some opium they have from Samantha’s medicine bag to knock him out for the “surgery.” Before they give him the opium, they promise to leave a trail of stones for him to follow.

The three eventually make their way to the cave system where the Troglodytes live. They kill two of the Troglodytes, but during the fight, Brooder is fatally wounded. The other two continue on at Brooder’s request. Brooder and a third troglodyte then take each other out. Eventually, the remaining Troglodytes capture both Chicory and Sheriff Hunt and put them in a cave near Nick and Samantha. Nick is soon gutted by the Troglodytes in front of the others. Samantha says that there are twelve Troglodyte males and that they have already killed and eaten Purvis. Sheriff Hunt tricks two of the Troglodytes into drinking alcohol spiked with fatal doses of opium. Nonetheless, things look grim for the survivors.

Meanwhile, Arthur awakens and learns that the others showed mercy and didn’t amputate his leg. He follows the trail to the Troglodyte caves. He manages to kill two of the Troglodytes and discovers they make the howling noises via shells implanted in their necks. He removes one such shell and uses it to make the noises they make. This tricks a couple other Troglodytes to approach him unawares and allows him to kill them. He makes his way to the cave where the others are being held and releases Chicory and Sheriff Hunt. The leader of the Troglodytes shows up and a fight ensues. They manage to kill the leader, but not before the leader fatally wounds Sheriff Hunt. We also discover the Troglodyte women are all blinded and bound, essentially used as sex slaves. Sheriff Hunt vows to stay and kill the remaining three males.

Chicory, Arthur and Samantha bid him a sad farewell and walk out into the desert for the long journey back to Bright Hope. As they leave, they hear three gunshots, suggesting Sheriff Hunt indeed killed the remaining Troglodytes. 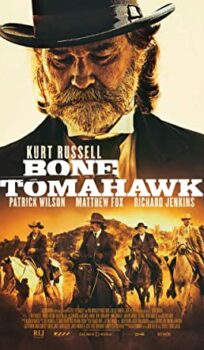