POOPER:
Rick allows himself to get caught by the police just a short distance from the U.S./Canada border so that way Lacey and her uncle Max can sneak Katie into Canada without any interference. Rick’s mother Margaret comes and gets him, and they return to Oakland, and Gus takes Rick to court when he won’t say where Katie is, refusing a lighter sentence in the process.

During the court proceedings, Max and Lacey show up with Katie. Rick curses Lacey for bringing Katie back, but Lacey tells Rick that coming here was Katie’s idea. Rick’s lawyer pleads with the judge to let Katie take the stand so she could prove that she possesses a high level of intelligence and doesn’t deserve to be kept as a flea market curiosity, and the judge allows it. Katie basically tells the court that she likes Rick but hates Gus, and she knows that being locked up in a cage is wrong, and being free is right. In the end, the court appoints Rick as Katie’s legal guardian.

During a trip to a gorilla preserve in Hawaii for a seminar on primate intelligence, Rick decides to leave Katie there with the other gorillas so she can mingle with her own kind for a change, but he promises her that he will come visit her in the future.

LONG VERSION:
Rick (Wil Horneff) and Katie arrive at the home of Lacey’s (Jean Marie Barnwell) uncle Max (John C. McGinley), and Lacey runs away from home and joins them there later on after getting a call from Max. The police track down Katie to the house, but when they arrive, they find that the four have already left in Max’s truck in the direction of the U.S./Canada border. The police go after them, and once they find them, Max initiates a high-speed chase.

The chase temporarily stops within meters of the border when a train passes between the four and the cops, and Rick comes up with an idea. Once the train passes, the chase resumes, and the truck eventually crashes. The police open it up to find only Rick inside, and he tells them that he had ditched the others earlier on. He is put in a squad car, and as he looks down the train tracks, he sees Lacey and Max successfully sneaking Katie into Canada.

Rick is taken to the police station, and later on, his mother Margaret (Helen Shaver) comes to pick him up. They return to Oakland, where their lawyer Woodley (Alan Ruck) tells Rick that the D.A. has offered him a plea bargain where, if he plead guilty to reduced charges, they would agree to probation instead of time in a youth facility, but he would have to tell them where Katie is so she can be returned to Gus (Peter Boyle). He refuses the deal, making it clear that he would rather spend years in a youth facility than see Katie back in Gus’ hands.

Gus takes Rick to court, and during the proceedings, Max and Lacey suddenly show up with Katie. Rick curses Lacey for bringing her back, but she tells him that coming back was Katie’s idea. Woodley pleads with the judge to let Katie take the stand so she can prove that she is highly intelligent and doesn’t deserve to be kept as a flea market curiosity, and the judge allows it. On the stand, Katie basically tells the court that she likes Rick but hates Gus, and she knows that being caged up is wrong and being free is right. In the end, the judge tells Rick that he is guilty of breaking and entering and will have to do 200 hours of community service and be ineligible for a driver’s license until he is 21, but because of Katie’s abilities, her relationship with him, and Gus’ poor record of animal care, he is now the court-appointed guardian of Katie. Rick and his mother and friends celebrate, and Lacey kisses Rick.

Rick and Margaret later visit a gorilla preserve in Hawaii with Katie to participate in a seminar on primate intelligence. The head of the preserve, Jack (Bruce Wright), watches as Katie tries to communicate with the other gorillas through sign language without success, and he remarks to Rick that Katie is “too smart”, for she doesn’t seem to know she’s a gorilla. Feeling that Katie would be better off mingling with her own kind for a change, Rick decides to leave her there. He explains to her that this is where she truly belongs, and she needs to go be a gorilla now, and he has to go be a kid. He tearfully hugs her goodbye and promises to come visit her. Katie is last shown frolicking with the other gorillas. 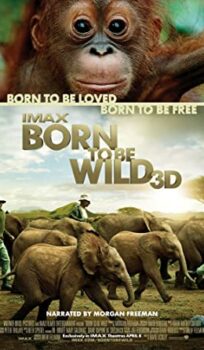