Unexpectedly, when it seemed Jack (Andrew Garfield) would be able to find a place again in the world and be happy, the tables turn on him: he is fired from his job and his friend Chris (Shaun Evans) won’t have anything to do with him and even calls him a “murderer”; it is then he realizes that somehow the word about who he really is has gone out.  To make matters worst, his girlfriend Michelle (Katie Lyons) -whom he hadn’t heard of for a couple of days- is still missing and people start suspecting of him for it.

And, as if it weren’t enough, the press is constantly watching for him and there are headline pictures of him all around, with a title making mention of himself as Boy A -the code name used to identify him at the time he participated in the little girl’s murder, as a child-.

Desperate, as he also doesn’t seem to be able to get ahold of Terry (Peter Mullan) by phone, he flees the city and goes to some seaside resort.  Meanwhile, Terry discovers his son Zeb (James Young) had to do with revealing Jack’s secret; all out of jealousy, because one night, drunk, he mistakenly called Zeb “Jack”.  Furthermore, Michelle is not missing, and is shown crying upon reading on the newspaper about Jack’s appalling past.

Meanwhile, Jack dreams about having a conversation with Michelle, in which she claims she had nothing to do with people finding out about his crime.  Realizing everything is lost for him and he won’t have a future either as Eric or Jack, he bids farewell to Terry and Chris via voicemail messages.

The last scene shows him standing at the edge of a pier and then goes black.  We are left to infer whether he commits suicide. 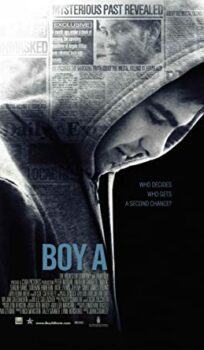