Pooper:
It turns out that Jonah has been dead the whole time, but his spirit is at ease by reconnecting with Corey. Corey goes abroad to college in order to pursue his passion, keeps in touch with Romany, and carries mementos of Jonah to this day.

Long Ending:
On Halloween day, popular teens Jango (Justin Holborow), Corey (Toby Wallace) and their other friends go to the local skate park. Jango and the other guys skate while Corey takes their pictures. Jango collides with a nerd named Jonah (Gulliver McGrath) and punches Jonah for getting in his way. Corey takes a picture of Jonah afterwards. The popular kids then don costumes and prepare tricks for Halloween while Jonah goes to a local creek to drink alone. Tension brews when Jango learns Corey is thinking of attending college far away in New York City (the film is set in Australia) to pursue photography.

The teens wreak some havoc, including posting pictures of a bloodied Jonah around town. They then meet some girls, including Corey’s secret crush Romany (Mitzi Ruhlmann). Corey runs off after Jango hits on Romany. He encounters Jonah in the park and the two begin talking. It is revealed that the two used to be best friends before having a falling out. Corey agrees to walk Jonah home and, along the way, they play a fantasy game they used to play as children.

As the night progresses, Corey grows as a person. He has a falling out with Jango over his boorish behavior, realizes how difficult he and his friends made life for less cool people like Jonah, and confesses his feelings to and has sex with Romany. Along the way, he promises never to abandon Jonah again. The two also deal with supernatural forces (that may just be part of the game).

Eventually, the reunited friends arrive at a tree that was the primary location for their fantasy game. There, Corey recovers a repressed memory. As children, he and Jonah were attacked by older teens. Corey ran away as the teens raped Jonah. The shame both felt caused them to break up their friendship. Corey apologizes and says a better friend would have helped. Jonah thanks Corey for his atonement.

Corey then sees Jonah’s body floating dead in the creek (he passed out from drinking and drowned earlier that day). It turns out Corey had actually been hanging out with Jonah’s spirit (who then departs with the mysterious man who is intimated to be the embodiment of Death). Corey breaks down in tears to learn he was too late to save Jonah’s life.

The film jumps ahead. Corey has moved to New York to study photography. He video chats with Romany, who has herself pursued her dreams. Corey then prepares to go out for Halloween, wearing the mask Jonah wore when he died (and the camera shows Corey’s dorm covered with mementos of Jonah). 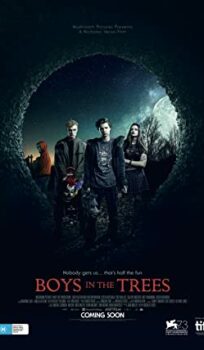