Father Flanagan (Spencer Tracy) has been running a home for skid row bums.  He becomes disillusioned, as he realizes that despite all his efforts, no one ever is rehabilitated.  He is called to the jail where a prisoner has asked to see him before being executed.  The prisoner says Flanagan was the only one who ever cared for him or tried to help him, but it was too late.  The prisoner was already a hardened criminal set in his ways at that point.  Flanagan is inspired to start a home for troubled boys to try to save them before they are set in their ways.  The town is against Flanagan, saying he will bring problem youths from all over to their area.  He has to move to an isolated area outside town.  If any of his boys commit a crime in town he will be shut down.  Whitey Marsh (Mickey Rooney) comes to Boys Town. He is the hardened, and Flanagan seems unable to affect him.  There is a robbery in town, and Whitey appears guilty, so Boys Town may be closed.  Whitey returns and reveals that his older brother committed the crime.  Whitey had gone to try and stop his brother, which is why he was there and got shot.  The brother’s gang is arrested, and Boys Town stays open. 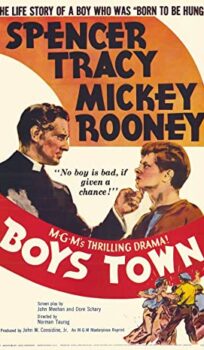