Ricky (Morris Chestnut) gets killed by the rival group they had a mild confrontation with, earlier.  This enrages Tré (Cuba Gooding, Jr.), and he decides to join Doughboy (Ice Cube) and the rest of the homies to get their revenge, much to Tre’s father (Laurence Fishburne) and Brandi’s (Nia Long’s) fear and dismay.

While searching for the rival group, Tré realizes that if he goes through with this revenge plan, he’ll be crossing a line that there will be no turning back from. Not wanting that, he asks Doughboy to let him out of the car. Doughboy silently complies, and he goes home. Doughboy and the others later find the rival group and kill them.

Afterwards, Tré and Doughboy hook up again, and Tré shows his support before Doughboy’s pain and anger of having lost his brother.  He tells him: “Remember you still got one more brother!”.  Then, title cards inform that Doughboy saw his brother’s body at the funeral the day after, but, two weeks later, he got murdered himself.  Also, that Tré went to Morehouse College in Atlanta that fall, and Brandi went to Spelman, right across the street. 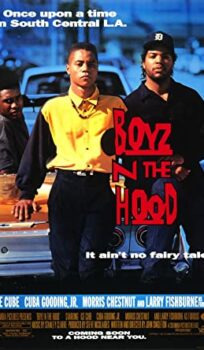