Paquita (Diana Penalver) falls in love with Lionel (Timothy Balme) after she is told by a tarot reader that they are destined to be in love. Unfortunately, Lionel has a bunch of problems – his father died when saving him from drowning and his mother (Elizabeth Moody) is domineering and obsessive. Paquita, who worries about Lionel’s fate, hands him a family amulet for protection. When his Mother follows the pair to the zoo, she is bitten by a Sumatran Rat Monkey from Skull Island, and soon turns into a blood-thirsty zombie.

Lionel can’t bring himself to kill her, and she soon infects Nurse McTavish, a punk named Void, and the local priest Father McGruder. Eventually Nurse McTavish and Priest McGruder have sex and the pair become parents to a rambunctious and uncontrollable zombie baby. Lionel’s relationship deteriorates as he tries to keep the zombie clan from wreaking any havoc. His Uncle Les (Ian Watkin) eventually discovers that Lionel is keeping the zombies in the basement, and blackmails him into handing over his house and his mother’s inheritance.

Uncle Les throws a party, and when Lionel accidentally gives the zombies stimulant instead of poison, they break free and devour most of the party (this film is reputed to have used the most fake film blood in any film ever). During the struggle, Lionel discovers that his mother actually killed his dad AND his dad’s mistress when she caught them in the bathtub together, and then blamed it on Lionel who was traumatized by the scene. Eventually, all are killed except for Paquita, Lionel, and the mother who has evolved into a giant, nude, zombie-monster. Lionel stabs her to death with his amulet and he and Paquita escapes as the house burns down around them, destroying all zombie remains (at least 50 zombies were killed by the end). He and Paquita share a passionate and blood-soaked kiss, finally free to be together. 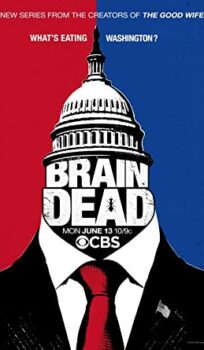