Michael (Edward Furlong) never really committed any of the murders. They all occurred in the game. After he is killed in the game by Detective Hayden (Frank Langella), he awakens to this realization. After trashing the electronics in his room, he goes to his secret crush Kimberly’s (Amy Hargreaves) house next door, where the party he saw before he played the game is still going on. He finds Kimberly, and asks her out. She says “maybe” initially, but she soon changes her mind after thinking about the current date she has now, kissing him before going back to said current date. Michael sees that she secretly photographed him in his room, further confirming her attraction to him.

The next day, Michael goes to his principal Dr. Fromberg’s (David Hemblen) office and gives him Brainscan to try himself. The Trickster (T. Ryder Smith), the evil mastermind of the game, shows up behind Fromberg, saluting and smiling at Michael. Michael smiles back before leaving. 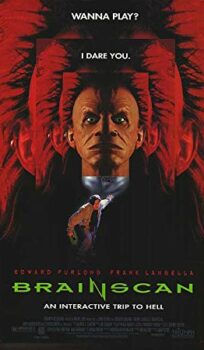