In the climactic battle at Dracula’s (Gary Oldman) castle, Harker (Keanu Reeves) slices Dracula’s throat, and a dying Quincy (Bill Campbell) stabs Dracula in the heart with his bowie knife.

Mina (Winona Ryder) keeps the others away while she and Dracula enter the chapel area of the castle, and Quincy succumbs to his injuries. Dracula asks for Mina to end his life, and so she drives the bowie knife right through him, killing him and freeing herself from his curse. She then takes out the knife and beheads him.

It last shows her looking at the ceiling at a glass painting of Dracula from 1462 with his wife Elisabeta (also Winona Ryder), which lights up slowly, no doubt implying that they are together again. 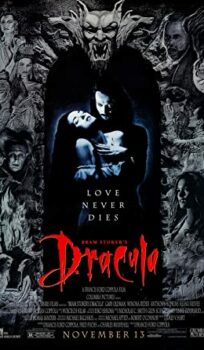