SHORT VERSION:
David, Debbie, and Angie manage to reclaim the stolen diamond from Harry, Babyface, and Patty and deliver it to the police just as they are about to take Jack to juvenile hall (they incorrectly believed that he had stolen it due to his fingerprints being found at the crime scene, which he had left before the crime first occurred), and also inform them that the criminal trio – which they have managed to incapacitate – are the real thieves. Harry, Babyface, and Patty are thus cuffed and taken to jail.

Jack and Debbie kiss, as do David and Angie, and after the amusement park closes, we discover that the new couples are having sex in the Skyride’s gondolas.

LONG VERSION:
Harry (Michael Rudder), Babyface (Pierre-Andre LaRoque), and Patty (Papusha Demitro) approach David (Thor Bishopric) and Angie (Rachel Hayward) and offer to buy the plush mouse doll Angie has in her possession, since it possibly contains the diamond they earlier stole from the amusement park, but David and Angie refuse to part with it. Harry tells them that they will just have to take it, so Babyface rips it out of Angie’s hands, and though David tries to attack Babyface, his punches have no effect due to his lack of physical strength. Babyface grabs David by the shirt collar and starts shaking him while Patty holds a knife to Angie’s throat, and Harry tears up the doll and finds that the diamond isn’t in it.

Jack (Carl Marotte) and Debbie (Carolyn Dunn) spot this and confront the crooks, and Harry whips out a knife of his own and tells Jack that Debbie must hand over her own mouse doll in exchange for David and Angie being let go. Debbie soon strikes Harry in the face with the doll, which causes the diamond to fall out of it. Jack snatches it off the ground first and he, Debbie, David, and Angie soon run away while the crooks give chase. A short time later, Jack sends David and Angie over to the office of the park’s owner, Charlie (Walter Massey), with instructions to tell him that he is in possession of the stolen diamond. David and Angie run into a policeman first and inform him of what they just went through with the criminals and that Jack has the stone, then they go to Charlie’s office with him. Meanwhile, Jack and Debbie continue to evade Harry, Babyface, and Patty until the trio finally do catch them, and Jack forks over the diamond before he and Debbie split.

Seconds later, they run into David, Angie, the police officer they spoke with, and the detective leading the investigation of the diamond theft, but Jack is then cuffed since he is suspected of being the thief due to his fingerprints being found at the crime scene (though he left them there before the crime had occurred). Jack and the others are all brought to Charlie’s office to be interrogated, and after David is questioned alone first, he tells Jack that his prints were found on the diamond’s display case, and Jack realizes that that is why they believe him to be the culprit. When Jack is then called in for interrogation, David tells him to stall the detective for as long as possible so he and the ladies can find and deliver the diamond and the real thieves.

David intercepts the criminal trio and reclaims the diamond through a simple ruse, but the ruse quickly fails, and he finds himself on the run from them again. They eventually follow David up onto a stage during a dance contest, but it turns out that he wanted them to follow him up there when Debbie covers the stage in motor oil after he gets off of it, causing the crooks to start slipping and sliding everywhere. David, Debbie, and Angie halt the cops just as they are taking Jack away to juvenile hall and give them the diamond, then tell them that they got it off the three people on stage. The cops promptly arrest the thieves, and as they are sitting in a squad car, the draw for the diamond begins. After the number is read out, Babyface discovers that the ticket he bought for the draw has the winning number on it, but when he tries to show this to Harry, Harry – not caring about what his ticket says – angrily rips it up and throws it out the window just before the police officers take them to jail.

Jack has a passionate kiss with Debbie, as does David with Angie, and the two couples spend the rest of the night dancing. Once the park closes, we discover that both couples are having sex in the Skyride’s gondolas. 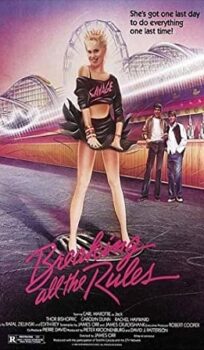