Pooper :
The family reunite, overcome their differences and decide to continue living together (at least for a little while longer). They then get the news that their Polish relatives have fled Europe and will be coming to live with them as well.

Long Ending:
Adapted from the Neil Simon play, this film takes place in Brighton Beach in 1937. The film follows an extended family trying to get by. The film is narrated by the teenager Eugene Jerome (Jonathan Silverman), whose hormones are raging. Beyond women, Eugene also dreams of becoming either a star player on the New York Yankees or a famous playwright. He lives with his older brother Stan (Brian Drillinger), and cousins Nora (Lisa Waltz) and the sickly Laurie (Stacey Glick). His cousins and their mother, Eugene’s Aunt Blanche (Judith Ivey), live with them because Blanche’s husband has passed away. The additional family members have caused quite a financial strain on the family, causing Eugene’s mother Kate (Blythe Danner) to carefully ration food and Eugene’s father Jack (Bob Dishy) to work two jobs to support everyone. Jack pays for all household costs, Laurie’s medicine, Nora’s dance classes and is trying to save for Eugene to go to college . Fortunately, Stanley (who skipped college) also brings in a salary.

One morning, Nora comes home to tell Kate and Blanche that she was offered a role in a Broadway show. Kate and Blanche are hesitant to give permission to her to join the production, preferring she stay in school. Meanwhile, Stanley loses his job after he sticks up for an African-American co-worker that was being verbally abused by his boss. The boss tells Stanley that he can get his job back if he writes a letter of apology that the boss will frame and put on his wall. The second company that Jack works for also goes bankrupt, meaning the household is now surviving on one salary.

When Jack gets home, he is inundated with all of these problems. On top of that, he worries about his relatives living in Poland as the Nazis are swiftly taking over Europe. Ultimately, Jack tells Blanche she needs to make the decision regarding Nora leaving school (Blanche says Nora must stay in school) and says that Stanley needs to follow his conscience in regards to the job (Stan decides not to apologize). Eugene, who adores his brother, constantly pesters him for advice about sex, revealing he also has a crush on Nora (it’s not as creepy as it sounds). Blanche is also courted by Mr. Murphy, their neighbor who lives across the street. Though he is very kind, Mr. Murphy is also an alcoholic. Kate looks down on Mr. Murphy, but Blanche agrees to go on a date with him.

Jack gets a second job as a taxi driver to make ends meet. The pressure ultimately causes him to suffer a stroke and he is confined to bed for the time being. Stanley decides to attempt to provide for the family by gambling at the local pool hall, but he loses everything to a pool shark (a small role played by Jason Alexander). Kate finds out about Stanley’s gambling and is irate, telling Stan he needs to find a way to tell their father about the lost money without killing him.

The pressure culminates on the night of Blanche’s date. Nora, angry at her mother for crushing her Broadway dreams, goes on a date herself instead of helping her mother prepare for her first night out since her husband died. This greatly hurts Blanche’s feelings. Blanche doesn’t end up going on the date because the night before, Mr. Murphy crashed his car while drunk and has been institutionalized. Subsequently, Blanche and Kate get into an argument over their childhood and how Kate needs to support Blanche. Blanche says that she will move out the next morning and find a job. Stanley decides to run away and join the Army rather than face his father, crushing Eugene’s spirit. When Nora comes home, she fights with Blanche and accuses her of loving Laurie more than her.

The next morning, Blanche prepares to leave. Kate comes and apologizes and tells her to stay, at least until she finds a job. They reaffirm their love for each other. Nora and Blanche decide to try harder to build a relationship. Stanley has a change of heart and comes back home and patches things up with his father. Stanley also bought Eugene a  picture of a naked woman, much to Eugene’s pleasure. Everyone sits down together for dinner and Jack is happy to have his family intact. Jack then gets a telegram that his family from Poland are emigrating to the United States and will arrive within the month. Though they have no idea how they will afford it, the family is excited to take in their newly-arrived kin. 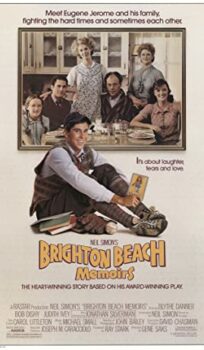