Pinkie Brown (Sam Riley), a sociopathic gangster in 1964 England, kills rival gang member Fred Hale after Hale kills Pinkie’s boss and mentor. However, a young woman Rose (Andrea Riseborough) is a witness prior to the act and can tie the gang to the crime. Pinkie, instead of killing her outright, sets upon seducing her and later marrying her to ensure her silence. Rose is smitten and promises to always be loyal. Pinkie later murders Spicer (Phillip Davis), the heir of the gang when he threatens to rat him out.

Ida (Helen Mirren), a friend of Hale, tries to save Rose, realizing what kind of monster Pinkie is. Pinkie realizes Rose will probably eventually expose him so he takes her up to a lighthouse cliff convincing her into a suicide pact (but in actuality just making her kill herself). However, Ida and fellow gang member Dallow (Nonso Anozie) intervene. Dallow, who believed Rose to be always loyal, fights Pinkie. Pinkie reaches for a bottle of acid in his coat but accidentally shatters it on his face, burning himself horrifically. In a panic, he runs off the cliff, falling to his death. Rose is devastated.

Rose, broken up by his death, enters a Catholic center for unwed/destitute mothers, heavily pregnant from her and Pinkie’s wedding night. Another girl had been given a record player, and Rose steals it to her bed to listen to a voice recording Pinkie had made earlier. Pinkie had said on it that he didn’t love her and hated her guts. However, the record malfunctions only saying “What you want me to say is…I love you” over and over again. Due to this, Rose continues to believe in her delusions of Pinkie’s love, never realizing how much he really hated her and was only using her to save himself. 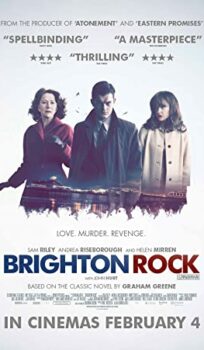