Pooper:
Danny gets Tina to Lou’s successful performance, after which Lou drops Danny for another manager. Several months later, a guilt-ridden Tina goes to Danny’s apartment and apologizes and Danny accepts the apology.

Long Ending:
We watch as several performers sit in the Carnegie Deli and discuss stories about hard-luck talent manager Danny Rose (Woody Allen). Danny is a genuinely nice guy and optimist who agrees to represent many bizarre and goofy acts. The main story follows Danny as he manages an older but still talented singer named Lou Canova (Nick Apollo Forte). Lou is Danny’s most talented client and Danny has such faith in his ultimate success that he even forgoes his early commissions.

One night, Danny manages to convince legendary comedian Burl Ives (playing himself) to see one of Lou’s shows, with a chance for Lou to perform on Ives’ national TV show. Lou believes that his mistress Tina Vitale (Mia Farrow) is his good-luck charm and wants her at the show. Because Lou’s wife will also be at the show, Lou convinces Danny to bring Tina to the show as his girlfriend.

When Danny arrives to pick Tina up, she is enraged, thinking that Lou has cheated on her. Danny has to follow her as she drives to her friend’s house. Once there, Tina’s ex-boyfriend mistakes Danny as Tina’s current boyfriend for whom she had broken up with him. Her ex-boyfriend is connected to the mafia and they order a hit on Danny. Tina soon realizes the danger they are in, but is unable to call off the hit. She and Danny go on the run together and bond during many comical adventures. Danny also learns that Tina has never felt any guilt for any of her actions. Further, unbeknown to Danny, Tina has introduced Lou to a more popular manager (she did so before ever meeting Danny) who will be at that night’s show.

The pair are finally captured and Danny convinces the hitmen that he is not Tina’s boyfriend. The two escape and they arrive at Lou’s show just in time. Lou is drunk, but Danny sobers him up. Lou takes the stage and is a wild success.

After the show, Lou decides to leave his wife for Tina. He also decides to hire the manager Tina introduced him to. Although Tina now respects and likes Danny, she refuses to intervene on Danny’s behalf. Danny storms out broken-hearted.

We skip ahead to where Danny is hosting Thanksgiving dinner for all his downtrodden clients and still living in his rent-control apartment. Although Lou has made it big, Tina is constantly depressed (she has even started a new affair , though it does not make her happy). Tina finally realizes that she is experiencing guilt for what she did to Danny. She shows up at his apartment and apologizes, asking if they can be friends. Although Danny is hesitant, he ultimately accepts her apology.

The narrator ends his story saying that Danny also received the greatest honor he could ever receive – having a sandwich named after him at the Carnegie Deli. 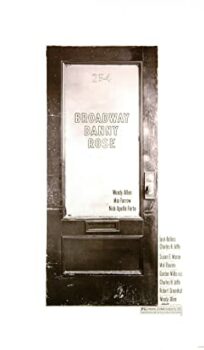