After their summer hearding sheep together on Brokeback Mountain in 1963, Jack and Ennis meet periodically over the course of the next 15 to 20 years. The first time Jack and Ennis (Jake Gyllenhaal and Heath Ledger) reunite after 3 or 4 years apart, Ennis’s wife Alma (Michelle Williams) sees them together, and immediately knows of their affair. As the years go by, Ennis and Alma grow apart, despite two daughters together, while Jack and his wife, Lureen (Anne Hathaway)–the daughter of a local large farm machinery dealer–raise a son.  Jack hides his affair with Ennis, trips to male Mexican prostitutes, and eventually, an affair with a local ranch foreman from his wife and her family. Ennis and Alma eventually divorce. Jack and Ennis continue to see each other, even though they both know that their relationship appears to be destroying their lives (especially Ennis’). One day, a postcard Ennis had sent to Jack is returned marked “Deceased”, and he learns that Jack has died.  He calls Lureen on the phone and she tells Ennis that Jack died in a freak accident of sorts while changing a tire.  While Lureen is relaying this information to Jack we are shown very brief glimpses of what appears to be Jack being beaten to death.  Lureen tells Ennis she had Jack’s body cremated per his wishes and notes that half of the ashes remain with her (in Texas) and the other half were sent to Jack’s parents house.  She adds that Jack had always said he wanted his ashes strewn on Brokeback Mountain, but she didn’t know where it was or if it even existed. Ennis visits Jack’s parents, and while his father refuses to let Ennis have Jack’s ashes to spread on Brokeback Mountain (and also indirectly reveals Jack’s affair with the ranch foreman–Jack had told Ennis it was the ranch foreman’s WIFE), Jack’s mother does permit Ennis to take two shirts (one inside the other) from Jack’s room.  One shirt is Jack’s, and the other is Ennis’–a shirt he thought he had lost on Brokeback Mountain in 1963.  The shirts have blood on the cuff from a fight the two had on Brokeback Mountain in 1963.  The final scenes show Ennis’ grown daughter Alma, Jr. (Kate Mara) visiting him at a trailer park where he lives alone.  She tells him that she is getting married, and asks him to come to the wedding. While Ennis initally resists, he finally tells her he will be there.  After she leaves, he sees she has forgotton her sweater.  He folds it up and puts it into his closet, where we see the two shirts (Jack’s and Ennis’) next to a postcard of Brokeback Mountain.  Ennis adjusts the postcard for a moment and says, “Jack, I swear.” 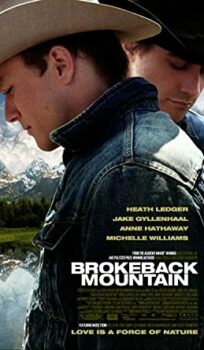