After various adventures and obstacles including thieving raccoons, a river (where it is revealed Nita is afraid of water), Koda’s growing jealousy towards Nita, a cave-in, an avalanche, and the attempts of Rutt and Tuke to charm two female moose, Kenai, Nita, and Koda arrive at the Hokani Falls where the amulet is burned at the equinox. Upon the amulet’s destuction, Nita loses the ability to communicate with animals. Kenai and Nita go their separate ways, with Nita returning to the village, crossing a river on her own and finally braving her fear of water.

Seeing how Kenai is in love with Nita, Koda prays to the spirits to turn Kenai back into a human so he can be with the woman he cherishes. He then heads for the village to retrieve Nita who by now realizes that ironically, though the spiritual bond between her and Kenai is broken, now her heart will not allow her to marry Atka. Alerted to Koda’s departure by Rutt and Tuke, Kenai rescues the cub from hunters led by Atka and retreats into the mountains. Koda is captured, but is rescued by Rutt and Tuke who both finally win the admiration and love of the two female moose. Atka corners Kenai at the cliffs, and thanks to Kenai being distracted by Nita’s pleas not to kill him, severely wounds and knocks him off the cliff. Outraged at Atka’s thoughtlessness, Nita breaks up with him.

While tending to Kenai’s wounds, both in their own way declare their love. The spirits give Nita once more the ability to speak with animals, but Kenai tells her he can’t abandon Koda. With her father’s blessing, telling her that he will always love her no matter what she chooses, Nita allows the spirits to transform her into a bear, much to Kenia’s delight.

The next day, a wedding is finally held, for Kenai and Nita. Among those attending are the villagers, the bear colony, the raccoons, and Rutt and Tuke together with their new lifemates. Before the movie ends, the spirits transform the pictures of Nita and Kenai they made at Hokani Falls years ago into two bears as they are no longer human. 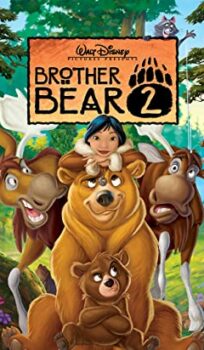