Kenai (voice of Joaquin Phoenix) finally grows and matures enough, and just as his brother Denahi (voice of Jason Raize) is about to kill him in his Bear form, Sitka the eagle (voice of D.B. Sweeney) converts him back into a human. Realizing that he is responsible for the life of the cub Koda (voice of Jeremy Suarez), Kenai asks to become a bear again. The film segues into a scene narrated by an elderly Denahi, telling how they all lived happily ever after. 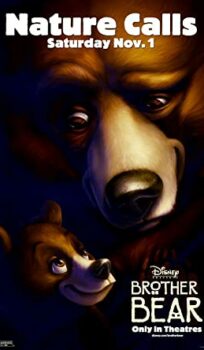