Agnes (Ashley Judd), divorced from an abusive ex-con and living in a seedy motel, meets Peter, an odd man who clearly also has a past, when her friend R.C. Brings him to “party” in her room one night. Despite his oddness, Agnes and Peter form a friendship, then a romantic relationship. After their first sexual encounter, Peter begins to imagine “bugs” constantly biting him, then Agnes. No one else sees the bugs; Peter and Agnes are convinced the bugs are part of a secret military experiment and everyone else denying this is part of the cover up. Eventually, this shared paranoid fantasy reaches the point where Agnes and Peter cover every square inch of their room in foil and cut out chunks of Peter’s body they perceive to be “egg sacs”. We eventually learn from a military psychiatrist who tracks Peter down that he is a delusional schizophrenic veteran. Peter claims the psychiatrist is part of the conspiracy to spread the bugs and stabs him to death. Then he and Agnes douse themselves and their room with fuel and burn themselves to death to prevent the spread of the “bugs”. 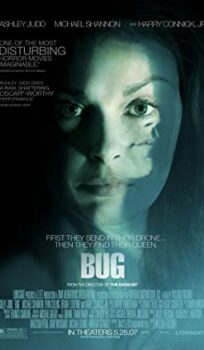