Ebby Calvin ‘Nuke’ LaLoosh (Tim Robbins) gets called up to “The Show” (the Major Leagues). Crash Davis (Kevin Costner) gets released/fired from the Durham Bulls because he is no longer needed to give “experience” and “wisdom” to Nuke.  Crash spends the night with Annie (Susan Sarandon), but leaves in the morning to get a job with another minor league team.

He plays only long enough to break the minor league home run record and then goes back to Annie.  He says that he is thinking about becoming a baseball manager and wonders if he could make it to “The Show” as a manager.  Annie says that she thinks he will and wants him to stay with her because she has decided to quit dating young ballplayers.

Nuke quotes some of the cliches Crash made him memorize during an interview and the movie ends with Annie and Crash going into Annie’s house together. 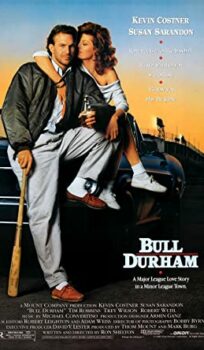