SHORT VERSION:
After Killer No. 2 kills Yoshi’s uncle and kidnaps his cousin Momoko so she can be made a prostitute in Nicola’s brothel, the Bartender takes the Drifter and Yoshi to the secret base of the Proletariat League of Defense, a small army of freedom fighters who have been training for the day when they will rise up and end Nicola and his regime. Together, they plan an assault on Nicola and his personal army of Red Suits, since the League knows where his castle is as well as the connecting Red Suit camp.

The good guys launch their assault on the camp and defeat the Red Suits and rescue Momoko, and then the Drifter and Yoshi continue on alone towards the castle to face Nicola. After getting inside, Yoshi ends up engaging Killer No. 2 in a swordfight and kills him, and he interrupts the confrontation between the Drifter and Nicola and shoots an arrow at Nicola’s neck, which cuts his clan’s medallion off of it. The Drifter then takes another arrow Yoshi has aimed at Nicola, breaks the head off of it, and ends up driving it through Nicola’s throat to make him bleed to death. Yoshi collects the medallion and then they leave.

Momoko goes into business with the Bartender to open a combined bar/sushi restaurant, and the Drifter and Yoshi bid each other farewell and go their separate ways, hoping to see each other again someday.

LONG VERSION:
After Killer No. 2 (Kevin McKidd) kills Yoshi’s uncle (Shun Sugata) and kidnaps his cousin Momoko (Emily Kaiho) while trying to find Yoshi (Gackt) in their restaurant/hotel, Yoshi and the Drifter (Josh Hartnett) are taken by the Bartender (Woody Harrelson) to the secret base of the Proletariat League of Defense, a small army of freedom fighters who have been training and preparing for the day when they will rise up and bring the fight to Nicola’s (Ron Perlman) regime. They meet with their general, who knows where Nicola’s castle is as well as the connecting camp inhabited by his personal army of Red Suits, and everybody creates a plan of attack. Meanwhile, No. 2 takes Momoko to Nicola’s brothel in the camp to be made into a prostitute, and he intends to have his way with her the next night.

The Proletariat hit a surprise attack on the Red Suits in their camp and end up defeating them, but the brothel is set afire due to Yoshi having shot a flaming arrow at its roof before the attack. The Bartender goes into the brothel and frees Momoko, but as he tries to leave, he makes eye contact with Alexandra (Demi Moore), who was earlier revealed to be the woman he was romantically involved with years back that saved him from nearly getting killed in a fight with Nicola by agreeing to become a prostitute in his brothel. As he calls out to her, a bunch of burning debris comes crashing down between them, and though we hear her scream, her fate is ultimately left unknown.

The Drifter and Yoshi then travel on alone to Nicola’s castle via a secret route, and after making their way inside, they go through some more of Nicola’s men before they both encounter Killer No. 2. Yoshi calls dibs on being the one to fight him, so the Drifter continues searching for Nicola and eventually finds him in another room, but is met with a thrown tomahawk to his chest. As Nicola monologues to the Drifter about this and that and demands to know who he is while administering blows to him, Yoshi kills No. 2 after a long and bloody swordfight.

Yoshi then enters Nicola’s room and uses his bow and arrow to cut his clan’s medallion off of Nicola’s neck, but when he aims another arrow to kill Nicola with, the Drifter stops him and then breaks the arrow in two, keeping the head as he falls to the ground again. Nicola picks up an axe to kill the Drifter with it, but the Drifter gets back up, and Nicola swings and misses while the Drifter thrusts the arrowhead through Nicola’s throat. As Nicola bleeds to death on the floor, the Drifter removes the tomahawk from his chest and lays it on top of him, then finally tells him that he was after him because he had killed his father years ago (the Bartender earlier told the Drifter that his father was a hero, but didn’t elaborate as to how he was). Yoshi grabs the medallion and then they leave.

A day or two later, Yoshi prepares to return to Japan, and Momoko decides to stay and open up a combined bar/sushi restaurant with the Bartender. The Drifter also prepares to leave town as well. The Bartender wishes both men good luck on their journeys, and the men say farewell to each other and go their separate ways, hoping that they will see each other again someday. 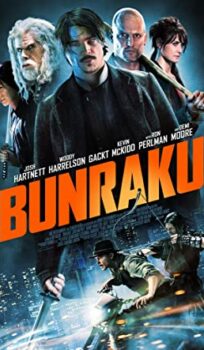