SHORT VERSION:
After Nathanial, Trina, and the crew of the Filthy Whore reach the island in Hell’s Bucket, Nathanial asks Captain Greybar how he can win Trina over, so he directs him to Calli, a woman who lives in a cave in the cliffs who has helped many a cabin boy become a man. He finds her and discovers that she is a six-armed, blue-skinned woman, but she takes his virginity. He descends the mountain and finds Trina, and his newfound confidence turns her on and she sleeps with him, too. However, Calli’s husband Mulligan, who is a giant, comes home and finds evidence of Nathanial having been there and leaves to find and kill him.

He comes down to the beach and spots the Filthy Whore sailing away, and he swims out to it to smash it. Despite the fact that the crew have stranded him and Tina on the island, Nathanial decides to help them out. Trina swims him out to Mulligan and he fights him, and after some assistance from the half-human, half-shark creature Chocki, Nathanial strangles Mulligan to death with his own belt. Trina and the crew praise him and call him the best cabin boy ever.

The gang reach Hawaii and Nathanial says his goodbyes to the sailors and Trina, but after meeting his father and getting dressed down by him for being disheveled and smelly, he decides to shun the fancy lad life for a life both on the sea and with Trina. He finds Trina, tells him of his decision and kisses her, and together they set out to rejoin the Filthy Whore’s crew.

LONG VERSION:
Nathanial (Chris Elliott), Trina (Melora Walters), and the crew of the Filthy Whore finally reach the island in Hell’s Bucket and start gathering up the materials needed to repair damage that the ship sustained in a fierce storm. Nathanial tries to get closer to Trina, whom he has a crush on, but she rebuffs his affections because she – like the ship’s crew – finds him to be an annoying imbecile. He asks Captain Greybar (Ritch Brinkley) and Skunk (Brian Doyle-Murray) for advice on how to win her over, so they tell him about Calli (Ann Magnuson), a woman who lives in a cave up in the cliffs who is known to help young cabin boys like Nathanial become men. Nathanial heads for the cliffs, and Greybar and Skunk admit in private that they hope Calli kills him somehow.

He finds Calli’s cave and discovers her to be a six-armed, blue-skinned woman. She tries to have him answer the three riddles of the island before she can take his virginity, but after he answers two of them moronically, she decides to sleep with him anyway, but warns him that they must get it over with before her husband, Mulligan (Mike Starr), comes home. His virginity having been taken, he descends the mountain and finds Trina, and she gets turned on by his newfound confidence and sleeps with him, too. Meanwhile, Mulligan – who turns out to be a giant – returns home and finds Nathanial’s bag on the floor. Angered, he leaves to find Nathanial and kill him.

When Nathanial and Trina get to the beach, they find the Filthy Whore sailing away, and Trina realizes that the crew has stranded them on the island. Just then, Mulligan storms down the beach into the water in the direction of the ship, and Nathanial tells Trina that they need to save the crew despite their betrayal. The crew see Mulligan approaching and try to defend themselves, but Mulligan quickly proves that he is no pushover. Trina swims towards Mulligan with Nathanial riding on her back, and he launches himself at the giant before he can do any serious harm to the sailors. Mulligan grabs hold of Nathanial, and Nathanial fesses up to being the one who slept with Calli, so Mulligan takes out a huge set of nail clippers and prepares to cut his head off with them. Suddenly, Chocki (Russ Tamblyn) – a half-human, half-shark creature who saved Nathanial’s life earlier in the movie and took a liking to him – comes to the rescue and distracts Mulligan, which allows Nathanial to take Mulligan’s belt off and then use it to strangle him to death. He gives Chocki his sincerest thanks, then gets back aboard the ship and gets a hug from Trina and praise from the crew, who call him the best cabin boy ever.

Nathanial, Trina, and the crew get to Hawaii, and as the crew relax at a bar, Nathanial comes up to them to say farewell before he leaves for his father’s hotel. Having developed an attachment to his crewmates, he tells them that he is sure his father would give them all jobs at his hotel, but they nix the idea, saying that all they know how to do is fish and stink. Nathanial then says that he feels the sea is part of him now, but Greybar replies that he is really a fancy lad and he ought to be proud of that. Nathanial says his goodbyes, and Trina tells him that she can’t be with him because the privileged lifestyle just doesn’t suit her.

Nathanial sees his father (Bob Elliott), who harshly criticizes him for being disheveled and smelly. Taking this as an insult, he decides to shun the life of a fancy lad then and there and sets out to rejoin the Filthy Whore’s crew. He finds Trina just as she is about to continue her swim around the world, and tells her that he wants to spend the rest of his life at sea with her and the crew, and they kiss. The movie ends with Trina swimming out to the Filthy Whore with Nathanial riding on her back again. 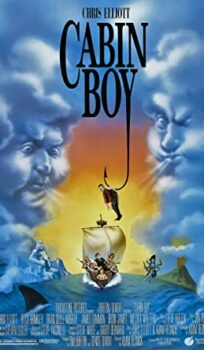