Honey (Rhea Perlman) reaches the CN Tower, intending to destroy it, and she finds the control center for the Hacker Hellstorm missile launch system in the observation deck. Thinking that the Hacker company was conspiring with the Canadians to fire nukes at the U.S., and still angry with the company for laying her off, she destroys everything with machine gun fire, deactivating the launch program and saving America from an unnecessary nuclear war with Russia. Boomer (John Candy) then retrieves her and they return to the U.S., accidentally leaving Kabral (Bill Nunn) and Roy Boy (Kevin J. O’Connor) behind in Canada.

The closing text states that Boomer realized his dream of being a regular on COPS, Honey was made the NRA’s Humanitarian of the Year, the U.S. President (Alan Alda) was defeated in the next election in the largest landslide in U.S. history and now hosts Get Up, Cleveland, Smiley (Kevin Pollak) served eight months of a life sentence for (unintentionally) killing Hacker (G.D. Spradlin), the creator and activator of the Hellstorm (he activated it so he and his company would profit greatly from the war that would’ve resulted), and was pardoned by the next president, Panzer (Rip Torn) killed himself when he learned Hogan’s Heroes was fictional, Kabral made NHL MVP three years in a row, and Roy Boy’s whereabouts become unknown. 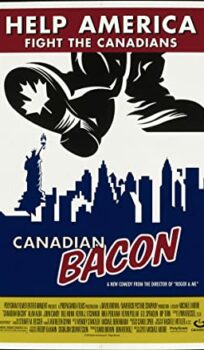