SHORT VERSION:
After enlarging Melvin’s Turbo Toilet 2000 with his Sizerator gun and fueling it with toxic leftovers he and Melvin steal from the school’s cafeteria, Professor Poopypants pilots it to the school and uses a ray powered by a device connected to Melvin’s humorless mind to turn all of the kids into kids devoid of laughter and humor. George and Harold avoid the ray and then turn Principal Krupp into Captain Underpants so he can distract Poopypants while they sneak onto the Turbo Toilet and free Melvin from the device. However, Captain Underpants is quickly defeated and put into the bowl to drown in the toxic slime, and Melvin alerts Poopypants to George and Harold’s presence. He thus has the Turbo Toilet seize them and then hits them with the ray full force.

They almost succumb to the ray until they hear Poopypants say “Uranus”, which makes them laugh so hard that their laughter destroys the device. Melvin jumps safely to the ground while the Turbo Toilet deactivates for good and the kids return to normal. However, Poopypants gets out and starts attacking George and Harold with the Sizerator, and as they cry for help, Captain Underpants regains consciousness and accidentally swallows some of the slime. This causes him to gain real superpowers, and he flies out and rescues the boys. When all is said and done, the school is saved and Poopypants is shrunk by the Sizerator, but he escapes on a bee.

Soon after, George and Harold decide that having Krupp around is less troublesome than having Captain Underpants around, and after making an oath to always be friends despite now being in separate classes, George crushes the Hypno Ring and turns Captain Underpants back into Krupp presumably permanently. The duo also decide to try to make Krupp less of an angry guy by secretly setting him up with the school lunch lady Edith, since they noticed an attraction between them, and the boys watch them as they have a pleasant date at a restaurant. However, the Turbo Toilet gets dumped into a toilet recycling center next door, causing its slime to spill onto the other toilets and turn them into hungry toilet monsters. As they start to wreak havoc in the restaurant, Krupp asks for the check and snaps his fingers while doing so, causing him to turn back into Captain Underpants once again. He then begins to fight all of the toilets.

LONG VERSION:
At a school carnival that Captain Underpants-as-Principal-Krupp organized, Captain Underpants’ efforts to make sure the kids enjoy themselves goes out of control and winds up damaging the building, plus George and Harold struggle to keep him from turning back into Krupp since he is repeatedly allowing himself to get doused with water. Pretty soon, a rainstorm occurs, turning Captain Underpants back into Krupp and keeping him that way. After seeing the destruction and disorder around him and then casting his gaze upon George and Harold, he realizes that they are responsible for this, and declares that their friendship is officially over. He finally puts them in separate classes like he planned, and the overall atmosphere of the school returns to its former depressing state. Even Krupp himself gets a case of the blues after seeing the casserole Edith the lunch lady made for him sitting on his desk, since he is attracted to her (as is she with him) but has never been able to bring himself to make the first move.

Around the same time, Professor Poopypants uses his Sizerator gun to turn Melvin’s Turbo Toilet 2000 into a giant robot, but discovers it needs an enormous, radioactive source of energy in order to function. Melvin suggests that they use the toxic leftovers in the school cafeteria, so they sneak in and steal a big pot of it and dump it into the bowl of the Turbo Toilet to make it operational. As the Turbo Toilet – piloted by Poopypants – begins its rampage towards the school, both George and Harold see it and try to alert their classes to this threat, but their teachers silence them. They both end up excusing themselves to use the bathroom, and they meet up in there. The Turbo Toilet then arrives outside, and Poopypants puts Melvin on top of it and sticks a device over his head that will channel his complete lack of humor and laughter into a ray that will strike and disable each and every kid’s Hahaguffawchuckleamalus (the part of the brain responsible for making you laugh and finding humor in things), rendering them gloomy and humorless. He then hits all of the children with the ray and transforms them, but George and Harold avoid it.

As they start wondering how they can unplug Melvin from the Turbo Toilet without Poopypants seeing them, Krupp strolls into the bathroom, and the boys turn him back into Captain Underpants so he can distract Poopypants while they try to free Melvin. Captain Underpants attempts to do battle with the Turbo Toilet, but since he lacks any actual superpowers, he is beaten with ease. When George and Harold reach Melvin, he rats on them to Poopypants, who comes out and faces them. George and Harold fake an apology by claiming that they actually like his name and say a bunch of silly names that they want to call themselves, but when he says that there is nothing funny about his name – which he gives in full as Pee-Pee Diarrheastein Poopypants Esq. – George and Harold can’t help but laugh upon hearing it. Poopypants orders them to stop laughing, and George tells him that his real problem is not that people laugh at him, but that he just can’t laugh at himself. Poopypants responds by having the Turbo Toilet drop Captain Underpants into the bowl to drown him in the toxic slime, then having it seize George and Harold. He then hits them with the ray, but upon discovering that their Hahaguffawchuckleamaluses are unusually enormous, he increases the ray’s power to maximum, and George and Harold start to slowly succumb to it.

Thankfully, as Poopypants is making an announcement where he states his intention to wipe out all laughter on the planet before moving on to the other planets, he mentions that he will attack Uranus and pronounces it “Your anus”. Both George’s and Harold’s sense of humor returns in full force after hearing this, and their laughter becomes so strong that it overwhelms the ray and hits the device over Melvin’s head, causing it to malfunction. Melvin then jumps off the Turbo Toilet to the ground just before the device explodes and returns the children to normal, and then the Turbo Toilet short-circuits and deactivates for good, freeing George and Harold from its grip. However, Poopypants gets out and fires shots from his Sizerator at them, intending to shrink them and put them in his pocket. He soon traps them in a makeshift cage made out of a bunch of lip balms he enlarged, and when they yell for help, Captain Underpants regains consciousness and accidentally ingests some of the slime. Thankfully, this causes him to develop real superpowers (revealed to be super-strength, flight, and unlimited projectile underpants), and he flies out of the bowl and soon gets a hold of the Sizerator.

As they are all relaxing in George’s treehouse later on, George and Harold are happy that they actually brought Captain Underpants to life, but accept that he is a bigger problem than Krupp ever was and thus must be turned back into Krupp permanently. Harold initially laments over how this means that they will be in separate classes for good now, but George assures him that they will always be friends even if this happens, and they then make an oath to be friends forever. George then crushes the Hypno Ring that entranced Krupp to begin with, bringing Krupp back presumably for good, and he falls out of the treehouse in embarrassment and confusion and runs off, swearing to punish George and Harold for this. George and Harold then come to believe that maybe the reason why Krupp is such an angry guy is because he doesn’t have any friends, so they decide to try to do something nice for him. Knowing of Krupp’s and Edith’s attraction to one another, the boys set them up on a date through sending them both false love notes with each asking the other out. George and Harold walk past Krupp after he has just read his love note and ask if he has any big plans tonight, to which he replies that he does, and then he returns the boys’ Captain Underpants comic books back to them (though they noticed that he just took them out of the trash). Before walking merrily away, Krupp admits to having read the comics and had found them to be pretty funny.

Krupp takes Edith to a restaurant for their date, with George and Harold watching from the window and acknowledging that it felt good to do something nice for him (though they swear to never do it again). Unfortunately, a toilet recycling center that lies next to the restaurant gets the Turbo Toilet dumped into it, and its slime spills out everywhere and onto a bunch of regular toilets, transforming them into hungry toilet monsters. As they begin to storm the streets and attack the other patrons at the restaurant, Krupp yells for the waiter to bring him the check, but he snaps his fingers while trying to summon him. He turns into Captain Underpants once more (much to Edith’s pleasant surprise), proving that destroying the Hypno Ring didn’t deprogram him. He flies out of the restaurant with George and Harold clinging onto his cape again, and he begins to fight all of the toilets. 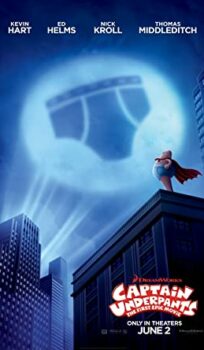