Vivian (Ashley Bell) a hostage to a bank robbery gone bad, finds herself at the mercy of Wyatt Moss (Pat Healy), a mentally disturbed Vietnam veteran and sniper.

Sheriff Moss (Alan Ruck), Wyatt’s brother who had turned a blind eye to his brother’s activities, tells him Vivian is important to the town and he cannot protect him if Wyatt kills her. Wyatt denies seeing her, but when Sheriff Moss finds one of the bodies of the robbers, he knows his brother has lied, and enters his compound, ready to turn on him, and sell him out to authorities (while playing himself as the oblivious sibling).

Vivian finds her way to Wyatt’s cabin and hears him kill a victim she had just met hours before over the radio. Grabbing scissors she lies in wait for someone to come through the door. When they do, she inadvertently stabs Sheriff Moss to death. Wyatt soon arrives and chases her into the underground catacombs. Vivian shoots at him, causing a cave in to fall on him as he taunts her.

Vivian finds a way out of the mine, and laughs maniacally before leaving to get help. Title cards say she brought authorities to Wyatt’s property where dozens of bodies were recovered. However, the body of Wyatt Moss was never found. 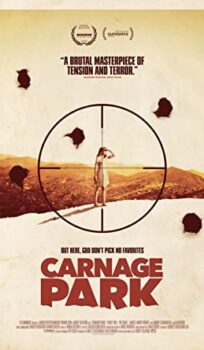