After Kat (Christina Ricci) and Casper (voiced my Malachi Pearson) trick Carrigan (Cathy Moriarty) into getting pushed towards the afterlife and the box with the treasure falls down, it opens up to reveal a baseball autographed by Duke Snider and a map of a Scavenger Hunt-like game Casper and his father used to play. Then, just when Casper is about to use the Lazarus to return to human life, the ghost of James (Bill Pullman) -having died after accidentally falling through a manhole earlier- flies in; Kat is heartbroken over this, which prompts Casper to selflessly give up his only chance to be human again and return James to life, seeing how Kat needs her father.

Vic (Garette Henson) and Amber (Jessica Wesson), who were trying to pull off a ghost prank, end up getting scared away by Casper’s Ghostly Uncle Trio. Meanwhile, Casper gets visited by the ghost of Kat’s mother, Amelia (Amy Brenneman), who as a reward for his good deed, allows him to be a human boy again until 10:00 pm “because he is only 12 years old”. At the same time Amelia appears to James to let him know that the Ghostly Trio kept their word and to encourage him to move on and keep raising Kat as wonderfully as he has so far, Kat is surprised by seeing Casper come down to the party as a human child (Devon Sawa) and tenderly dance with her.

Then, as Amelia leaves, the clock strikes ten and Casper seizes the opportunity to kiss Kat, but, as he does, he reverts to his previous ghostly form, to the surprise of Kat and the attendees; when he playfully says “uuuhhh… boo?”, everyone screams in terror and runs away. Finding themselves left alone, Kat alludes that it wasn’t that bad of a party, to which Casper answers it could’ve been better and James retorts it’s not over. Then, he cues the Ghostly Trio to start playing the Casper Theme song, to which Kat, James and Casper dance together as the movie ends. 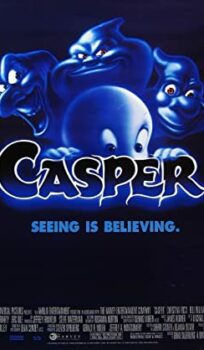