Edward Bare (Dirk Bogarde) is a young man who married the wealthy old Monica Bare for her money.  He listens in on a conversation she has with her lawyer.  She is going to change her will to give everything to him, but he misunderstands and thinks she is changing the will to write him out of it.  He kills her that night, by leaving the gas on in the room.  It is ruled an accident.  He is, of course, distressed to learn of his error regarding the will, where all the money now goes to Mrs Bare’s sister.

Edward finds a new rich widow to marry, Freda Jeffries.  After their wedding, Freda insists on separate bank accounts and keeps her money for herself.  Another older widow, Charlotte Young, moves in nearby and begins to pay a lot of attention to Edward.  Edward wants to get rid of Freda, so he can marry Charlotte.  He begins to plan clues and drop hints to make people think Freda is suicidal.  Edward sends Freda off to the country, and lures Charlotte to the house.  Edward reveals to Charlotte that he knows her secret.  Charlotte is really the sister of his first wife Monica.  Charlotte admits she suspected Edward of killing Monica, and is trying to find evidence to convict him.  Edward tries to frighten Charlotte into leaving, but she is not so easily scared.  However, Freda returns unexpectedly, and throws Charlotte out of the house.

After Charlotte leaves, Edward admits to Freda that he killed Monica.  He also tells her that he cut the brake line on Charlotte’s car. There is a steep hill down to town, where she is sure to crash and die.  As the next of kin, the estate will now come to him.  Right after he says this, Charlotte and the family lawyer step into the room.  The lawyer stopped Charlotte from leaving, as he too suspected Edward and was working with Charlotte.  When the lawyer goes to call the police, Edward makes a run for it.  As Edward reaches the steep hill, he realizes he took Charlotte’s car with the brake line cut.  He drives over the cliff to his death. 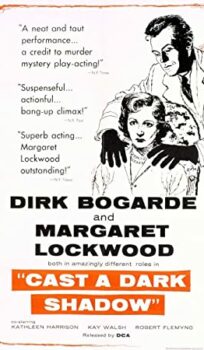