QUITTERS, INC.:
Richard (James Woods) quickly learns that Quitters, Inc. is run by the mob, and that the founder was a mob boss who died of smoking-induced lung cancer. Also, the doctor in charge of helping him quit, Donatti (Alan King), informs Richard of how the place gives increasingly worse punishments to the recovering smoker and his family members whenever they light up during the first month of constant “supervision.” One day, Richard smokes a cigarette, and Donatti’s thug Junk (Tony Munafo) sees it. Knowing that his wife Cindy (Mary D’Arcy), will be hurt, since that was the penalty for his first offense, Richard tries to get home to her before Junk does. He’s too late, and Donatti calls him to the clinic where he– despite trying to fight Donatti and Junk –is forced to watch Cindy in the “Rabbit Room” getting her feet jolted by the electrified floor for 30 seconds. When Richard and Cindy meet outside, he explains the situation to her, and in the end she decides to stay with him despite what happened. Richard eventually gets put on diet pills when he experiences weight gain associated with quitting smoking, and is told by Donatti that if he goes over his set weight limit, his wife’s little finger will be cut off. When Richard & Cindy have dinner with their friend Jimmy (Court Miller)- who recommended Quitters, Inc. to Richard -and his wife Sharon (Susan Hawes) one night, Richard notices Sharon has no little finger on her right hand.

The cat, caught earlier by the clinic to use to demonstrate the electricity of the Rabbit Room, escapes during the scuffle between Richard, Donatti & Junk when his cage is broken. He heads to Atlantic City, New Jersey, where he is eventually picked up by mob boss Cressner (Kenneth McMillan) and taken to his penthouse.

THE LEDGE:
Norris (Robert Hays) is caught by Cressner’s men for having an affair with his wife, Marcia (Patricia Kalember), and is brought to Cressner’s penthouse. Cressner proposes a bet to him: Walk the entire ledge of the top floor of his 34-story apartment building. Should he refuse to take it, he would be framed for heroin possession through heroin planted in the trunk of his car. Should he take it and succeed, the heroin gets removed, he gets a large sum of money, and he gets Marcia, no strings attached. Norris manages to complete the walk around the ledge, but when he comes inside to collect his winnings, Cressner reveals that he had Marcia killed. Norris attacks Cressner, and though Cressner’s henchman Albert (Jesse Doran) tries to shoot him, the cat makes Albert trip and drop the gun, allowing Norris to take it and shoot and kill Albert. Cressner begs Norris to spare him, and Norris responds by making him walk the ledge himself, promising to spare him if he completed it. Some time into the walk, a pigeon starts pecking on Cressner’s ankle, and when he kicks it away he loses his footing and falls to his death.

The cat escapes the apartment after Albert is shot, and heads to Wilmington, North Carolina, the hometown of the girl he is supposed to find and protect.

THE GENERAL:
The cat, who is given the name General by the girl, Amanda (Drew Barrymore), is supposed to save her from a small troll living in her bedroom wall that wants her soul. Despite Amanda’s mother (Candy Clark) sending him to an animal shelter one day to be destroyed because she believed he killed Amanda’s bird (the troll actually did it), General escapes and gets back to the house, stopping the troll just as it is beginning to take Amanda’s soul. After fighting it for a while, he chases the troll up on top of Amanda’s record player and turns the speed of the record up real high, causing it to be flung into Amanda’s floor fan and torn to pieces. After Amanda shows her parents evidence of the troll’s existence, she successfully blackmails them into being allowed to keep General so long as she told nobody about what she saw. 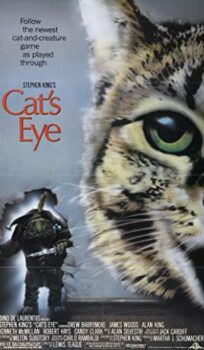