SHORT VERSION:
After he spends a week with the tribe of cavemen, which sees him saving them from cannibals and winning the love of Eba, Rex winds up following a trail that takes him back to the mine in the present day. He tells his class all about his adventure and how he met a gorgeous girl during it, but none of them believe him, both because he has no proof and because he had only been gone for 20 minutes. However, the mine’s caretaker, Bill, believes him, telling him that he has been to that era multiple times in his life. He asks Rex if he loves Eba, and after Rex says he does, Bill tells him that he can either stay here or move on.

Rex decides to go back to the past and returns to the mine’s entrance, but his class – having followed him there – stops him before he can go in. He tells them that he is going back and he wants them to tell his parents that he will be okay, and moments later, Rex and the class get surprised by the arrival of Eba’s fellow tribesman Dar, who saw Rex return to the present and followed him. Bill’s story is then confirmed as fact when he and Dar happily recognize each other. Rex then heads back to the caveman era with Dar and reunites with Eba.

LONG VERSION:
One day, Rex (Daniel Roebuck) and Eba (Cynthia Thompson) finally sleep together, but while they are busy enjoying each other’s bodies, Eba’s entire tribe gets captured by a tribe of cannibals and taken back to their lair. Rex and Eba later come across a bunch of discarded skulls, and Eba warns Rex that the cannibalistic tribe left these. They are then surprised by the cannibals, and though they try to run away, the cannibals soon surround them, knock Rex unconscious, and make off with Eba. When Rex later awakens, he begins to look for Eba, and during his search, he randomly finds his bag containing some of his belongings.

Rex locates the cannibals’ lair while remaining out of sight, but he gives away his presence when he makes noise, and the chief sends one of her tribesmen to investigate. Rex leads the man a distance away from the lair, then ambushes him and knocks him out. Returning to his hiding place, Rex sees the chief threatening Eba, so he quickly creates a scary costume out of his belongings and then surprises the cannibals with it, then throws firecrackers all around them to scare them away. He then frees Eba and the rest of the tribe and they return to their land.

Sometime later, while Rex is sitting by the river with Eba, he tells her he loves her and teaches her how to say those words to him. Suddenly, he finds his lost glasses on the riverbank, and he surmises that the way back to his own time lies somewhere upstream. Before leaving to check it out, he tells Eba that he isn’t going away and restates that he loves her. Sure enough, he does find his way back to the area he first awoke in and vanishes back into the mine in the present day, unaware that he was seen disappearing by Eba’s fellow tribesman Dar (Darren Young).

Rex walks out of the mine’s entrance and finds his classmates and his professor (Lawrence Gabriel Jr.) out there. Though he soon fills them in on where he spent the last week, what he did there, and how he met a gorgeous girl while he was there, none of them believe him, both because he doesn’t have any proof (he did make tape recordings, but he left them behind in that era) and because no more than 20 minutes have gone by since they first went into the mine. After they walk away from him, Bill (Bill Adams) – the caretaker of the mine – comes up to him and says that he believes him, recalling how he has made many visits to that time period during his life. He then asks Rex if he loves that woman that he was with, and when Rex says he does, Bill tells him that he can either stay here or move on.

After taking some time to think, Rex decides that he wants to be with Eba. As he starts to walk back to the mine, his professor sees him go, and he follows him just after he tells the other students to come with him, and Bill trails behind them. The professor stops Rex just as he reaches the entryway, and Rex tells them all that he is going back and wants them to tell his parents that he will be okay. After his class still refuses to believe him, Dar suddenly emerges from the entrance, shocking them. Dar then casts his eyes upon Bill, and the two of them recognize each other and communicate a little through noises and gestures, proving that Bill was telling Rex the truth. Rex then heads back to the past with Dar, and the professor decides to just let him go and keeps the other students from making any effort to stop him.

The last scene shows Rex and Eba walking hand in hand along a field, and they let the chief Argh (Jeff Chayette) tag along with them. 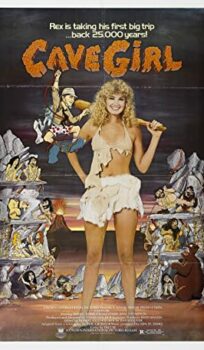