Short version:
Isaías (Matheus Nacthergaele) and Moisés (Caio Junqueira) are actually Josué’s (Vinicius de Oliveira) half-brothers.  Dora (Fernanda Montenegro) figures this out while reading the letter their father had left behind, six years ago.  She also decides Josué is better off staying and living with his brothers, so she goes back alone to Rio, while reminiscing of her journey with Josué.

Longer version:
Dora and Josué eventually make it to the settlements off Bom Jesús Do Norte; however, when they ask around for the kid’s father, they are told he moved away from the address they had from him a long time ago and hasn’t been heard of since.  Furthermore, there would be no buses returning to Rio until the next morning.  She calls Irene (Marília Pêra) and has her sell some appliances and send the money to Dora.

A young man overhears them and introduces himself as Isaías, “a friend of Josué’s dad”, and asks them both over to have dinner and stay.  Dora claims to be a friend of the man’s, but Josué, wary of him, says his name is “Gerardo”.  When they arrive at the house, there is another guy whose name is Moisés.

Isaías recounts the story of their father’s departure: nine years earlier, after the death of Isaías and Moisés’s own mother, he married Ana (Soia Lira) -Josué’s mother-, who then, pregnant, left him, due to his destructive alcoholism, to move to Rio and never return.  Three years after that, he decided to embark in a search for his second wife, from which he’s never come back.  Isaías gives Dora a letter he left behind, explaining he had to find his wife and the son he never met, to bring them back so they could all be a family again.  While Dora reads this on the letter, she figures out the two young men are Josué’s half-brothers (she even brings up “Josué” in the letter, although it doesn’t seem to be really written on it).  Isaías still holds the hope of his father returning, while Moisés disses the idea.

Upon seeing a genuine developing bond between Josué and his two older half-brothers, Dora makes the decision of leaving him with them and going back to Rio the next day.  She wakes up at dawn, leaves Ana’s letter (the fateful one from the beginning of the movie, where she longed to find her husband and stepsons again, but which Dora never mailed) and catches the bus.  Josué wakes up, notices Dora’s absences and tries to catch up with her, only to find the bus gone.  On the ride back, Dora writes one more letter to Josué, expressing the profound impact the boy had had on her life, how she felt he was better off staying with the only family he had left -his brothers- and hoping they wouldn’t forget each other.  In the final scene, they both look tearfully at the picture they shared at the pilgrimage, as a sign of the connection they made through their journey. 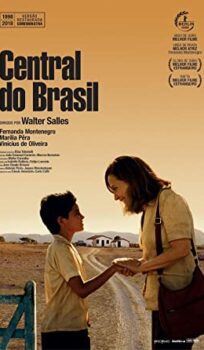