Sam Davis (Michael Angrarano), a children’s book author, convinces his old friend Marshall (Reece Thompson) to go on an adventure/vacation with him.  As it turns out, Sam’s got ulterior motives and is using Marshall as a ride to get to Zoe’s wedding to crash it.  Sam and Zoe had an affair — Zoe (Uma Thurman) being older than Sam and engaged to Whit (Lee Pace) who is a neglectful fiance and filmmaker — which she broke off in a post card.

In the course of the film, we learn that Marshall was pistol whipped and is using it as an excuse to not get on with his life.  While at the house, he pines after a sad maid while flirting with a bridesmaid who runs hot and cold on him.  We also learn that Zoe’s brother, Teddy, is a drunk/druggie who is pretty much a screw up — Marshall saves him from drowning and he gives Marshall his shoes — and he doesn’t really like Whit.  Marshall leaves after Sam confronts him about not getting his life going, then comes back to ask out the sad maid… who barely speaks English and refuses him.  We also learn that Whit is kind of a pompous windbag — it’s his birthday weekend so he just decided they should get married to “keep the party going” and makes the group sit through his terrible film, dances terribly, and is pretty much a self-involved fat head.

Sam and Zoe play games with each other with trying to make the other jealous (Sam goes off to another room with another girl, implies they had sex, but we find out later she held him as he cried instead), eventually Sam and Zoe sleep together, and then, after showing Zoe his mermaid children’s book (their story with a happy ending where they ride off together on a whale) Zoe tells Sam that Whit knows all about their affair and knows that she won’t leave the financial/etc. security Whit offers for a one-bedroom apartment with Sam even if they’re in “love.”

Sam, finally defeated, leaves with Marshall (after he’s attempted to ask out the sad maid) and at the wedding ceremony we see Zoe open up her vows — an envelope that has a postcard (the way she broke up with Sam was via postcard) and a list Sam wrote called something to the effect of “Reasons Zoe should marry Whit (and not me) by Sam R. Davis”.  She looks emotional (maybe regretful) and then we switch to a view of Sam and Marshall driving away on the freeway and then the credits roll. 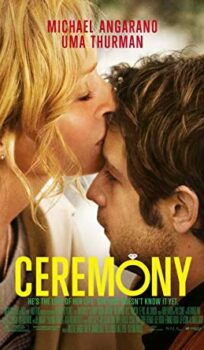